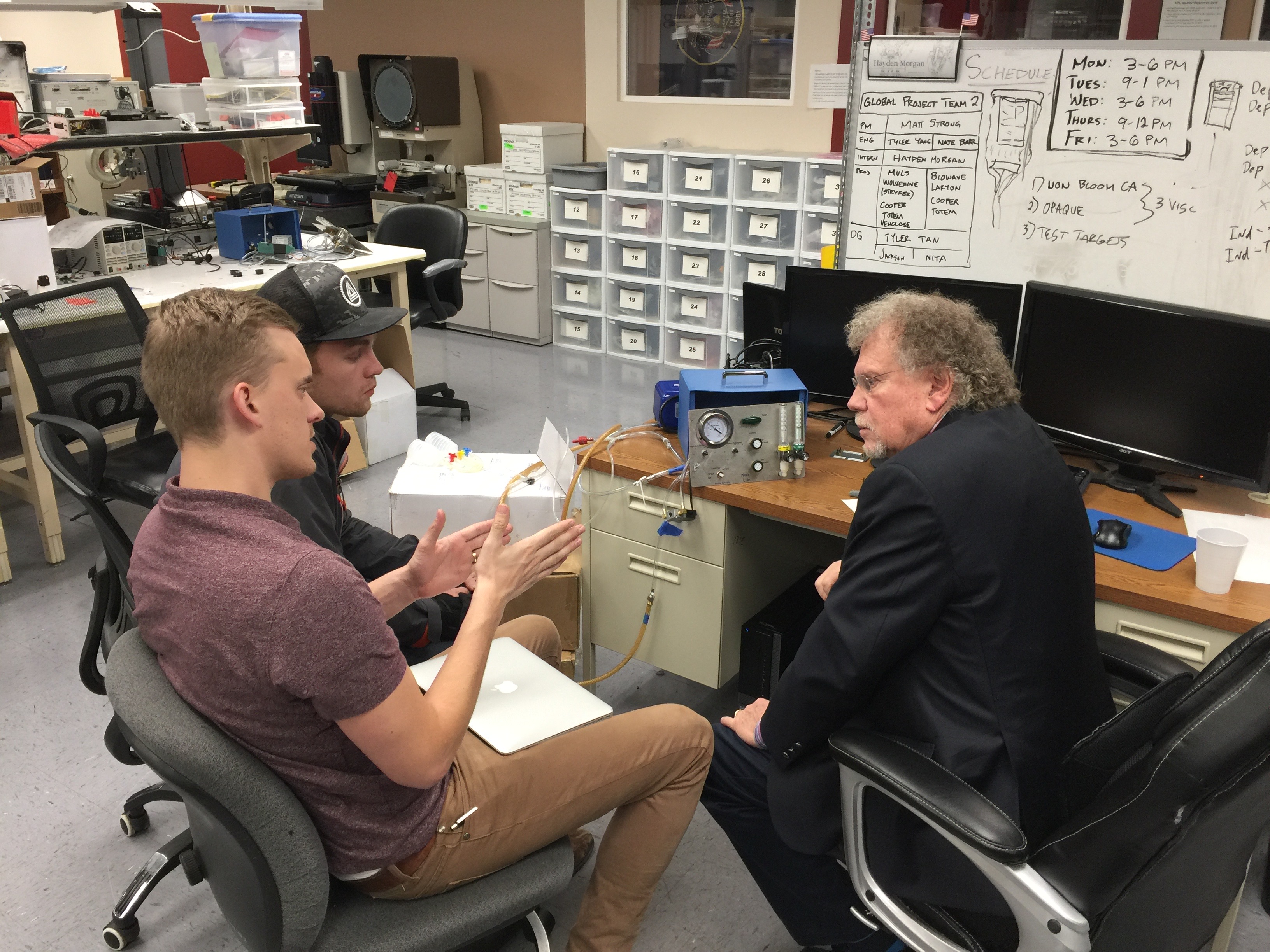 Founding members of Neonatal Rescue experienced saving a baby’s life on a ventilator first-hand after working hard on developing a ventilator for newborn babies abroad.

Kindall and Erica Palmer are founding members of Neonatal Rescue, what was originally called Team Cambodia. They started the project in early 2016 and participated in the Ballard Center’s Y-Prize Newborn Challenge.

“It was all very exciting to us about how we could save millions of babies around the earth with a ventilator and C-pap device all-in-one,” Kindall said.

The team did research and put together a presentation demonstrating how their device could save 4,000 babies a year in Cambodia alone and another 18,000 babies in East Africa.

“None of that really meant anything to us until our son was born, and within 12 hours he was immediately intubated and put on a ventilator to save his life,” Kindall said. “He turned blue, and without that extra help he would have passed away in our arms the following morning after he was born.”

For the next two months, the Palmers’ son was on a ventilator, and without it nothing else that was performed on him would have done any good because he couldn’t breathe. He just wasn’t strong enough. Kindall said his son’s case was an extreme case and in most countries children with those problems would die.

The ventilator is a simple device which helps babies born without fully developed lungs breathe until they are strong enough to do it themselves.

“The current situation is that (these babies) either, worst case scenario, pass away, or develop some long-term disease or even short-term pneumonia, in which case they pass away,” Kindall said.

The Palmers’ experience turned projected estimates of saved lives into a reality for Team Cambodia, now Neonatal Rescue. Neonatal Rescue’s mission is to provide a simple, low-cost device and training for doctors and nurses.

“We train their doctors and nurses how to use it, and then suddenly we start saving lives that should be saved anyway because they’re so easy,” Kindall said. “None of that really means anything to you until you go through the nightmare of having your own child on that device.”

BYU marketing student Ryan Moffet is an original member of the team. Ryan decided to join the team when approached by his cousin Kindall.

“I have graphic design experience and website design experience, and Kindall was trying to build a team that had a variety of different talents so we could use all of those talents to make the best business venture possible,” Ryan said.

Ryan originally saw the opportunity as a great resume builder, but after seeing his cousin’s newborn on a ventilator for almost two months, Ryan’s motivation shifted.

“Once I could see them in a hospital setting, it shifted from being this resume builder to this is something that could help people all across the world, and I need to be involved with this because I know that my skills and talents are going to aid this (project) to progress,” Ryan said.

“There is nothing better you can be doing than helping them to build their family,” Ryan said. “That’s the goal. It’s always been the goal, and it will continue to be the goal.”

The team chose Cambodia to implement their device because of research conducted on infant mortality in the country. Ryan said Cambodia does not have a great system for recording deaths — a baby might be born and then die, but never be recorded as a death for world statistics.

“This country really needs this device because there could be thousands of babies that are going unaccounted for that we just don’t know about,” Ryan said.

Team Cambodia recently merged with Team Uganda to form Neonatal Rescue. Team Uganda was part of the same competition hosted by the Ballard Center. The judges initially planned on choosing one winning team of the competition, but they ended up selecting both Team Cambodia and Team Uganda because each team had good plans going forward, according to Margaret Melville, founding member of Team Uganda.

Margaret and her teammates joined forces with Team Cambodia since they have the same vision of bringing this ventilator to those who need it. The team now consists of nine members, all with the vision of saving babies lives worldwide.

“There was a lot of synergy between what we were doing and what Team Uganda was doing,” Kindall said. “After the competition and everything, you know, boiled down, I thought, ‘why don’t we just bring people together? We both have good purpose in heart.'”

Margaret said Cambodia is a really great place to do the testing but there is less of a market to sell, whereas in Uganda and East Africa, there are more hospitals, more opportunities to sell and more money.

“It has always been my dream to run a social venture, and I never thought I’d have the opportunity to do it while a student. So when I heard about the Y-Prize competition, it was so exciting to think I could actually make a difference and do good in the world now,” Margaret said.

Margaret was able to go to Uganda this past summer with one of her teammates to have their ventilator approved and gain feedback.

“We had already been working on the project for about six months, but once we were there and brought the machine and we showed it to hospitals, and showed how it worked, and just to see their eyes light up to be like ‘Wow this will help us to save our babies, this will change the lives of so many people in our country,’ that just made it so much more real,” Margaret said.

Kindall said they are not trying to make millions off of this project.

“We are literally developing something that is low-cost and getting it to people that need it for a sustainable amount of money,” Kindall said.