Logan tells Pokemon players to stay out of parks after dark

Pokemon Go players in Logan will have to find a different place to catch nighttime-specific monsters as city officials are reminding residents that parks and trails are closed after dark.

“Attention Pokemon Catchers: it’s time to lace up those shoes, power up your smart phones, and flip those caps around. Provo City is hosting its first ever GO Catch-a-thon at the historic Provo Courthouse, Friday August 12th starting at 7:00 pm.”

The Provo City Library published a blog post on Thursday, August 4 in response to the removal of the Pokestops from the library. The library shared their blog post on social media.

The Provo Library is now selling Pokemon t-shirts for $10 at the circulation desk. The t-shirt reads “Caught ’em all at the Provo City Library.” The library’s distinctive tower is integrated with a book designed to look like the Pokemon logo.

The statue of the popular Pokemon character was discovered Sunday morning in Coliseum Square Park by local residents. The artist is currently unknown and was not authorized to place the statue in the park.

A group of BYU students have found a way to make “Pokemon Go” a playable experience for children who are hospitalized and cannot walk outside to play the app. 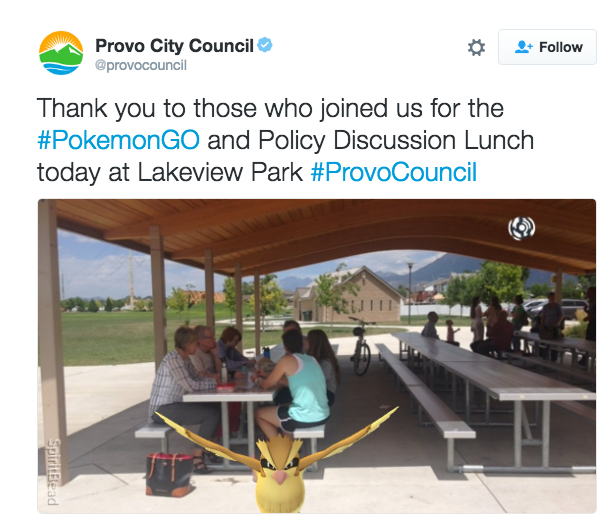 Provo City Council is trying to bring in a new crowd to their Policy Discussion Lunches by inviting “Pokemon Go” users with lure modules at parks.

The phenomenon of Pokemon Go and its massive popularity among BYU students could only be described as sensational. Players can be seen roaming all over campus and around Provo to catch, evolve or battle their Pokemon. One extremely popular Poke Stop is the Provo Library.

One student claims Pokemon Go has doubled, or even tripled, his activity levels. Another now spends 45 minutes per day running in order to play.

BYU students and Utah residents are trying to “be the very best like no one ever was” with the new “Pokemon Go” app.