The United States Court of Appeals for the Armed Forces reviewed the legal case U.S. v. Rice at the J. Reuben Clark Law School’s moot courtroom on Oct. 16. They debated whether or not the charges brought against Col. Robert J. Rice in 2013 were a violation of double jeopardy.

The double jeopardy objection made by Rice was related to both civil court and court-martial cases for the alleged possession and convicted distribution of child pornography. After the military judge denied Rice’s motion to dismiss based on double jeopardy, Rice entered a conditional plea for guilt. When he made the same claim in civil court, the court dismissed the distribution conviction.

Stephen Vladeck, an attorney who represents Rice in the renewal of the double jeopardy claim for the court-martial appeal, talked about the importance of addressing the issue.

In reviewing developments of the issue, he argued that the double jeopardy clause was violated and claimed the court-martial charges were a successive prosecution of one of the civil offenses, thus being a double jeopardy violation.

On the contrary, Major Catharine Parnell, representing the U.S., argued that the appellant’s convictions were not a violation of the double jeopardy clause partially because of articles that “discuss the separability of article 134: clauses one, two and three.”

Students sat, listened and took notes throughout the argument as judges tested the validity and constitutionality of the appellee and appellant’s arguments.

Opportunities to give students a closer look at these court processes are why the United States Court of Appeals for the Armed Forces holds court at military installations and law schools across the country.

Chief Judge Scott Stucky explained that the court moves from courtroom to courtroom twice a year. As he and his colleagues hear real cases, they hope to not only show “how it works,” but also to show that “there is a functioning, well-established system of military justice.”

In reflection of the oral argument held on Oct. 16, BYU Law’s Assistant Dean for communications Lynnett Rands said the event and the question and answer session after provided the community with an opportunity to learn.

“It was a wonderful opportunity for our community to witness excellent oral arguments and the exchange between the judges and counsel in the appellate process,” Rands said. “The judges were very generous with their time, engaging with students in the morning and answering questions after the session, which gave us a better understanding of federal courts and the military justice system.”

Not only was Rands grateful for the opportunity, but Stucky also expressed his thanks to the BYU Law School.

“We certainly have enjoyed being here,” Stucky said. “The law school has been very, very pleasant — very polite.” 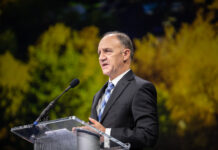