BYU jumped out to an early score of 7-0, which forced the Saint Mary’s coach to call a timeout. The timeout proved effective as Saint Mary’s turned the tide on BYU, going on a 9-0 run of its own to bring the score to 9-7. Dalton Nixon and Connor Harding provided help off the bench for BYU with a pair of field goals, while Nixon led all BYU scorers at the half with nine points. Heroics from Jake Toolson provided much-needed momentum for BYU. Toolson was driving down the right wing when he rolled his ankle, silencing the crowd as he was helped off the floor without putting pressure on his injured leg. Five minutes later, Toolson checked back into the game — a move that helped change the outcome of the first half. BYU headed into the locker room with a 43-40 lead — a lead that was extended by Nixon’s layup, with 16 seconds remaining in the half.

Saint Mary’s was relentless for the majority of the second half, jumping out to a quick 57-51 lead after being down by three at halftime. Led by a game-high 29 points courtesy of Malik Fitz, Saint Mary’s held the lead until just four minutes and 36 seconds remained in the game, lost it for 26 seconds and then regained it moments later. The Gaels remained ahead until there was just nine seconds left before some late-game heroics from TJ Haws set the Marriott center into a frenzy.

With time ticking down in the game, BYU was left with one final shot. Toolson took the ball down the left wing before dishing it off to Haws while Yoeli Childs set a pick. Saint Mary’s Jordan Ford was caught going behind the back of Childs instead of going in front of him, giving Haws an open look from the 3-point line. Haws drained the bucket with nine seconds remaining, sealing the victory for BYU. 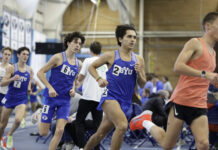