A proposed resolution in the Utah Legislature that would enforce existing firearm laws instead of creating new restrictions has prompted a mixed response from the public.

“I couldn’t find a solution that didn’t infringe upon our constitutional rights, referring directly to the Second Amendment,” Maloy said.

Maloy said his resolution balances protecting society with not infringing upon individual rights.

HJR7’s text claims the best way to protect the vulnerable without taking away people’s right to bear arms is by enforcing existing laws in the Utah Code, according to Maloy.

“That’s not to say that there haven’t been people hurt and harmed and murdered,” Maloy said. “But it’s everything we can do to protect our society while also protecting the rights of our people. We cannot just allow law-abiding citizens to be turned into criminals.”

Members of the House Law Enforcement and Criminal Justice Standing Committee discussed HJR7 on Feb. 5. The resolution received a favorable recommendation and has since passed the House second reading.

“There are a lot of issues with chiseling away the Constitution. We have the right to bear arms, and the state of Utah has some great laws that protect those who own guns,” Potter said. “The problems that we’ve seen are not, in my opinion, from good, sound, safety-minded gun owners.”

“In this era when there are heinous and horrific crimes, there is frequently a predictable rush to do something in response,” Judy said. “HJR7 sends an important message and that is before new laws are passed, which may not be the right thing, the first course of action should be to enforce those existing laws that are already in place.”

He said new laws could have unintended consequences and hurt gun owners’ rights.

Jacom Stephens, a resident in favor of the resolution, conceded in regard to safe storage laws that he considered gun owner responsibility to be important.

“But I don’t believe that that’s the government’s job to decide what’s appropriate for any particular person,” he said. “The same solution is not going to work for everybody else.”

“Every gun owner just still needs to be responsible for storing their gun in safety,” Jensen said. “I know they want to access them quickly, but I don’t understand the cost of a potential life being more than the limitations imposed on law abiding citizens.”

Noah Blumenthal, a Salt Lake City high school student and outreach director for March for Our Lives Utah, expressed concern about the resolution’s lack of attention to firearm-assisted suicide.

Ed Rutan from the Gun Violence Prevention Center of Utah said he opposes the resolution’s passing and said a “significant” number of Utah gun deaths are due to suicide.

Utah resident David Page said only 5 percent of suicide attempts are successful without the use of a gun. He claimed gun deaths and injuries are increasing in the state of Utah.

Wendy Parmley, author of “Hope after Suicide: One Woman’s Journey from Darkness to Light,” said Utah is fifth in the nation for suicide deaths.

When Parmley was a child, her mother killed herself using a hunting rifle. Parmley suggested that if there were there gun regulations in place at the time of her mother’s death, it is possible she could still be alive today.

“Certainly, others will continue to attempt suicide and many die by opiates, but the majority die by guns, and anything we can do to prevent that is worth doing,” Parmley said.

Kathryn Fitzgerald spoke on behalf of the League of Women Voters and voiced the league’s opposition to the resolution.

“This resolution promotes a mindset that would hobble the Legislature from addressing these issues in productive ways in the future,” Fitzgerald said. “We think that it’s a mistake.”

“Independent of the subject matter, I feel like it’s bad policy for the Legislature to say we have enough laws in any certain arena, that we don’t need any more. There are consistently new situations, new things that come up, and I just feel like limiting what we can do restricts us,” he said. “I would vote no if this dealt with tax policy or anything unrelated to gun violence, but I do feel like it puts us in a bad position saying we have enough — and why are we here creating new laws if what we have is enough?”

Rep. Paul Ray, R-Clearfield said he maintained his “personal belief that gun control is not an answer.”

“I fully believe that what we’re doing here doesn’t preempt us from doing anything in the future,” he said.

Ray said the resolution states that Utahns believe they have a right to bear arms.

“You have criminals who are going to commit crimes regardless,” he said. “The best we can do is allow our citizenry to be armed and protect themselves against those kinds of people.”

House members passed the resolution on Feb. 14 and will be considered on the Senate floor next.

BYU will require new employees to have a valid temple recommend 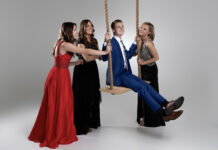