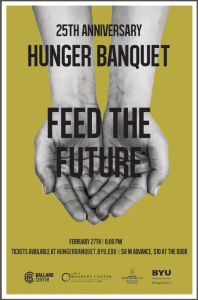 In the fight against hunger and unsustainable food practices in the world, the organization has chosen food security as the theme of the evening, which will begin at 6 p.m. in the Wilkinson Student Center ballroom.

“Among other things, the banquet teaches about food security, poverty and class systems,” said the organization’s co-president Austin Jensen.

Jensen is double majoring in Spanish and sociology and minoring in international development. The senior said being involved in the Students of International Development Club and helping to organize the Hunger Banquet has helped him find his place on campus.

The event starts with a fair showcasing nonprofit organizations where students and participants can visit various booths, talk to local organizations and see how they can get involved.

The participants are then ushered into the ballroom and are separated into different classes — 70 percent into lower class, 20 percent in middle class and 10 percent in upper class. Every class has different meals provided that reflect the social economic income.

“It is a powerful experience. I’ve seen adults in their 50s sitting on the floor while college students sit on tables. To see others with less than you has a powerful impact,” Jensen said.

The organization hopes to raise awareness of global hunger and move people to become interested in this cause.

Jensen said one in eight people in the world doesn’t have enough to eat. When people at the banquet get upset or complacent about the setup, Jensen said, it makes him happy, because it shows how unfair world hunger is.

“Yes, it is entertaining. Yes, it is a good time. But we want people to understand the issue and be involved,” Jensen said.

Senior co-president Clarissa Aquino said because of the gracious donations for food and entertainment, all ticket proceeds will go to three non-governmental organizations. She said last year they raised close to $6,000 and are hoping to raise more this year.

Aquino said because this is the 25th anniversary of the Hunger Banquet, the organization has planned to do it big. She said this year the organization partnered with Heifer International, a company that seeks to work with communities around the world to care for the world and end hunger and poverty.

The Hunger Banquet provided Aquino opportunities to use skills outside of her major. She said she never imagined doing tasks that include budgeting, event planning, working with organizations, working on teams and leading different committees. “It has been interesting but good. Definitely a learning process, but it’s been fun and rewarding,” Aquino said.

One of the rewards she sees is being able to help students find something they are passionate about, watching them get involved and helping them implement new skills to their future.

Sophomore Kelsey Knecht said this banquet is also a catalyst to spread awareness of causes that make a difference. Knecht is in charge of the organization’s advertising. For this event she said she tried to involve more volunteers and local clubs.

Knecht also had to do research on statistics of world hunger. She said Asia has the most hungry people in the world. Knecht learned through her experience researching statistics on world hunger that there are a lot of false facts. She said it is good to be passionate but also to be correct and have accurate facts.

Knecht said organizing the banquet made her more aware and opened her eyes to what is happening in the world. She encouraged people to get involved. “Getting involved made me feel important. It will help you feel like you’re making a difference,” she said.

The Hunger Banquet is open to the community. Tickets are available online. Pre-sale tickets cost $8, and tickets at the door cost $10.