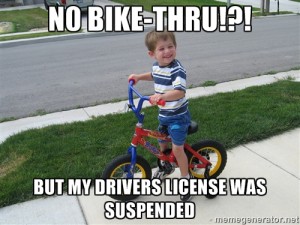 Cyclists who want to grab a quick taco or hamburger while cruising through Salt Lake City may soon find that Utah has restricted their two-wheeled meals.

Lawmakers are considering a bill that would allow Salt Lake restaurants to ban cyclists from drive-thru lanes, a move that would override a city rule passed just a few months ago.

Since September, Salt Lake City has required restaurants to open drive-thru lanes to cyclists if the lobby is closed. A proposal from Rep. Johnny Anderson, R-Taylorsville, would prohibit cities from making such regulations and allow businesses to decide whether to serve cyclists.

“I don’t believe it’s appropriate for a city to do that,” Anderson said. “They’ve gone too far.”

A Senate committee approved the bill Tuesday, and the full chamber is scheduled to hold a final vote Friday.

Anderson thinks having bikes in drive-thrus is dangerous for cyclists and could lead to more accidents and robberies at drive-thru windows, although he said he is not aware of any such incidents.

When the city was considering the rule, Salt Lake County Sheriff James Winder raised public safety concerns. He said the hours when lobbies are usually closed, between 10 p.m. and 6 p.m., are particularly dangerous because of dimly lit drive-thru lanes and the increased presence of drivers under the influence of drugs or alcohol.

A Salt Lake City police spokesman said the department has not noticed an increase in accidents since the rule took effect but has not been closely following the issue.

Luke Garrott, who represents downtown on the Salt Lake City Council and originally proposed the pro-cyclist regulation, said the rule aims to help “correct the imbalance of the transportation system in Salt Lake City” and make it more accessible to people who do not want to drive.

Some restaurants were closing their lobbies in the evening but keeping drive-thrus open, said Garrott, meaning that only people in vehicles could order food. Allowing that situation contributed to residents’ dependence on cars, he said.

The Utah Restaurant Association supports allowing businesses to decide on bikes. The increased potential for crime or injury may cause liability insurance rates to rise, spokesman Andy Stevenson said.

A regional official for the National Association of Mutual Insurance Companies, a large liability insurance company, said the increased risk of allowing cyclists in drive-thrus would be factored in to insurance premiums.

Stevenson, who spoke in favor of the proposal during Tuesday’s Senate committee hearing, said Salt Lake City’s rule is unusual. The only other place with a similar provision is Maine, he said.

Although Maine does not require that cyclists be served at drive-thru windows, it does have a law waiving liability for businesses that do.

The risk and potential insurance increases are being overstated by those favoring the proposal, said Garrott, who called the concern about additional crime a “red herring.”

Although many lawmakers say they support the bill, others are worried about getting involved in local politics.

Sen. Gene Davis, a Salt Lake City Democrat, said it’s not the state’s place to nullify a local rule that went through the proper channels and received public feedback.

Sen. Todd Weiler, a Woods Cross Republican, voted to move the bill forward but said Tuesday that he wasn’t sure he supported it. Although he thinks businesses should be free to make their own decisions, he is uneasy with the idea of interfering with local government.

“It’s kind of arrogant for the legislature to come in and say, ‘I know better than you do,'” Weiler said.