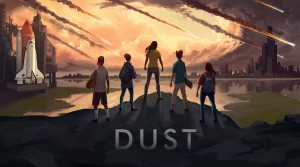 The game, titled “Dust,” is an alternate reality game that encourages players to immerse themselves in a fictional world while still using real-world skills and media to guide them on their journey.

The development team featured students and developers from BYU, the University of Maryland, Tinder Transmedia, the National Science Foundation and NASA. They all collaborated to create a game that not only entertains but simultaneously educates.

“If you were a young person today, how would you want to learn about science?” said Jeff Sheets, director of the Laycock Center for Collaborative Creation at BYU. “(The game) is engaging people around scientific subjects in a way that is relevant to them.”

“Dust” is centered around an alternate universe where a meteor shower has caused dust clouds to enter into earth’s atmosphere, rendering adults around the world unconscious. It is up to the teens to investigate the “origin of the microscopic extremophiles,” solve the problem and save the planet.

The game itself is an interactive and collaborative experience that features challenges and exercises aimed at increasing student interest in science, technology, engineering and math. Developers created the specific challenges the players will face to increase specific inquiry skills found in the Next Generation Science Standards set forth in the K–12 Science Education Framework. In order to progress through the game and hone these inquiry skills, students will be required to use mobile applications, social media and a series of online graphic novels to tackle subjects including astrobiology, neurobiology and even ethics.

Sheets explained that one of the reasons for the game’s creation was not to necessarily change the way students learn but rather to improve it.

“We think we can actually teach more effectively and engage more people with a platform like this as opposed to a traditional textbook only,” Sheets said. “Then students might be doing science homework for fun.”

The game is available around the country to all who want to play but is specifically designed to engage girls ages 13–15, as well as minorities such as Hispanics or African-Americans. According to BYU student and “Dust” collaborator Belinda Zoller, the game was designed to educate students of all backgrounds but specifically to increase girls’ interest in STEM fields.

“There is a dearth of women in STEM careers and majors because they are discouraged at various points throughout their young lives to pursue those different fields,” Zoller explained. “When we made this game, even the color choices were determined based on whether they would appeal to girls. We tried to make it very inclusive and open to everyone.”

According to BYU senior and student project manager Shelbi Andersen, girls ages 13–15 were specifically targeted because that can be a very pivotal age range in deciding what to study for a prospective career.

“That is right before kids start to decide what they want to study for college,” Andersen said. “So if we start with middle school and high school age, that is when they’re going to realize, ‘Hey, I like science,’ and decide to pursue that in college.”

In 2011, women made up less than 25 percent of STEM jobs, according to a report published by the U.S. Department of Commerce. Among the men and women who graduated with STEM degrees, women were less likely to work in STEM-related fields and instead opted for jobs in healthcare or education.

“When I was in high school, I had some really good science teachers, and I developed a love of science because of these teachers,” Zoller said. “Not everyone gets to have these experiences, so I’m hoping that this game can give people a really positive science experience that they may not be able to get in a classroom.”

“Dust” will continue to run for the next six weeks, with different challenges each week. More information can be found on the game’s website.