BYU researchers have weighed in on third wave feminism, finding that Disney princesses give girls confidence as debate continues on media treatment of women.

“There have been many waves of feminism, and each one has affected me in different ways,” said Melody Chow, a media arts major. “The first wave gave me the right to vote, the second wave gave me a brighter future career-wise, and the third wave allows me to feel better about not having to fit specific gender roles.”

Feminist rippling effects within the media have produced movie reviews like the Bechdel Test, the #YesAllWomen movement and other feminism-centered Internet sensations. Researchers at BYU have been involved in other ways.

“What are the effects of exposure to Disney princess-related media on gender stereotyping, body image, prosocial behavior and aggression in early childhood? That’s what we wanted to find out,” Coyne said in a lecture last year.

Coyne’s research tested 307 preschoolers to see how much they identified with a Disney character and how much they watched the movies or played with the character toys. Researchers also interviewed the girls’ parents to gauge the children’s tendencies and behavior.

The Bechdel Test, coined by Alison Bechdel in a comic strip, has recently been used as an indicator of gender bias in films and other forms of media. BechdelTest.com lists certain criteria each film must have in order to pass the test. The film must have at least two named women. The two women must talk to each other about something besides a man.

Six out of the top 10 box office releases in the U.S. passed the Bechdel Test this year.

Disney princess movies are often centered around a female heroine, so the majority of Disney films easily reach these standards.

Many feminist ripples have not proceeded as quietly as Disney’s move to feature more strong female leads in its movies. Several discussions have gone viral, like the “How the Media Failed Women in 2013” video, the Ray Rice domestic abuse scandal and Emma Watson’s speech about gender equality at the UN.

One particular rippling effect was the Isla Vista killings that led to the #YesAllWomen hashtag. 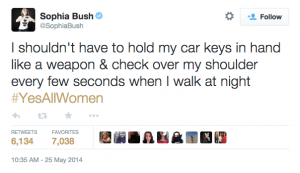 In May 2014, Elliot Rodger posted an anti-women manifesto to the Internet and went on a shooting spree that killed six people near UC Santa Barbara. Shortly thereafter, #NotAllMen started circling to counteract and mock the hatred the shooter had for women.

The hashtag had been used before, but feminists countered it with a new hashtag, #YesAllWomen. Women used it to share stories and experiences of misogyny, sexual harassment and violence against women.

Women of the LDS faith also entered the discussion by creating their own, lesser-known #YesEvenMormonWomen hashtag to document the abuse women of faith have endured.

BYU theater education student Nichole Clarke recently launched a new theater project based on the #YesAllWomen movement in the hopes of opening a community discussion on those issues brought up in the social media campaign.

Clarke said she felt that while the campaign was moving and sometimes deeply saddening, it did not lend itself to healing for the people on either side of those issues. She felt the excessive use of hashtags and anonymous social media declarations did little to help the problem.

“As I saw the #YesAllWomen (movement) come about, I saw very negative tones between both men and women regarding the issues that were being brought up,” Clarke said. “I was amazed at how very little was being heard from either side. … There needs to be real conversation, and we need to hear each other. We need to find empathy.” 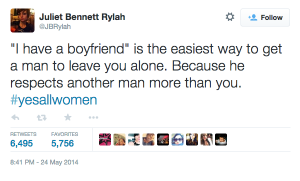 Clarke’s project seeks to expand on multiple workshop discussions into a devised theater production that will reflect thoughts and stories shared from the community. Devised theater productions consist of collaboratively written, improvised work, and because Clarke’s project is based on what they learn from the community discussion, the actual performance is still a mystery.

“Because we are still at the beginning, it is hard to say what the end product will be,” Clarke said. “However, we do have some goals that we hope to reach.”

Clarke’s ultimate goal is to further the monologues created by #YesAllWomen and #YesEvenMormonWomen into real discussions.

The feminist wave in the media seems to be making longer strides because of these  projects at BYU and other universities.

“If none of those waves had happened, I would have probably been married a while ago with a second baby on the way, expected to tend to my husband and children as if that was my only purpose in life,” Chow said. “(Because of this wave) people are definitely more aware of the portrayal of women in the media … people are (becoming) more media literate. But we still have a long way to go.”