President Thomas S. Monson lowered the age requirement for mission service more than two years ago, and the LDS community is starting to recognize resulting social changes in marriages and the perceived role of women in the Church.

The number of missionaries in the field has grown dramatically since then. Current statistics indicate that the mission force is more than 88,000 strong. 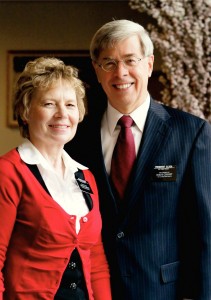 Male and female missionaries are now serving and returning from missions around the same time, increasing the likelihood that couples who dated before going on missions will date once again after returning.

An American Fact Finder Census on Utah County found that the number of unmarried males ages 18–24 was 35,957 in 2013. There were a total of 30,791 females from the same categories, leaving 5,166 extra males who were never married in Utah County.

Ron Hammond, a BYU graduate with a doctorate in sociology and family studies, and who is a professor of sociology at Utah Valley University, said if “the Utah marriage rate reversed itself by 2019, you might have reason to attribute that to the changed ages in missionary application.”

But potential societal changes in the LDS community from the missionary age change are not limited entirely to relationships — there has reportedly been an increase in pressure to serve, particularly for young women.

All worthy LDS males are encouraged to serve by the priesthood leaders of the Church, but President Monson clarified during the October 2012 General Conference that “young women … are not under the same mandate to serve as are the young men.” 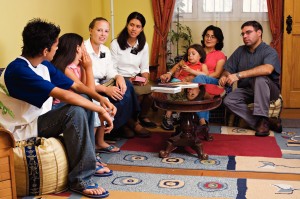 Thousands of women have answered the call to action, but not all have felt impressed to put in their papers. Some felt the need to pursue a degree, get married or simply wait to serve missions.

Nicole Law was a BYU student and almost 19 when the age change announcement was made.

“I realized I had to decide for myself,” Law said. “I didn’t want to serve right away because if I was going to go on a mission, it was going to be for the right reasons, not because I wanted to travel somewhere new or do what everyone else was doing.”

Law decided she needed to continue with her educational goals rather than go on a mission. She knows her choice was the right one for her, but at times she feels that she has to justify it, especially when others ask her if she’s planning on serving and her response is “no.”

That’s not the only difficulty Law said she’s faced when it comes to serving a mission.

“Sometimes it seems like guys’ expectations are higher — that girls need to serve now because of that. And it’s not fair to (girls) that aren’t and also to (girls that are choosing to serve),” Law said. “A mission doesn’t determine how spiritual a person is.”

Lowering the age requirements prompted many women to seriously consider serving missions, leading some to experiences they never imagined they’d have. 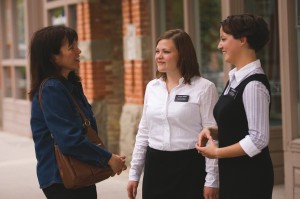 Kaelin Cowley, a junior majoring in psychology, planned to serve as soon as possible.

She had received her call to San Bernadino, California, Spanish speaking, when she got in a car accident that damaged her foot so badly that she had to undergo three surgeries throughout the course of seven months.

She was eventually medically released from her mission.

Cowley said she’s thought about serving again now that her foot has healed, but she’s realized she now has more reasons to stay than go.

“What I’m doing here, looking to help people with mental illnesses, it’s more important for me to be working on that here and now than to be serving a mission,” Cowley said.

Cowley also said that “we need to stop associating serving a mission as being the best Mormon you can be, because it’s not true. You don’t have to go to a foreign country or state to become more spiritual. You can do that wherever you are.”

Some women knew they needed to serve and got ready to leave as soon as they could after hearing President Monson’s announcement.

Marianne Acerson wanted to serve a mission and was able to do so and not worry about her educational goals. She recently returned to BYU from her mission in Milan, Italy.

“I realized that it would be difficult to leave the accounting program that I desired to be accepted to,” Acerson said. “(But when I heard the announcement), I knew God was sending me a message. It was the perfect birthday present; my 19th birthday was the very next day. He was telling me that I could do both.” 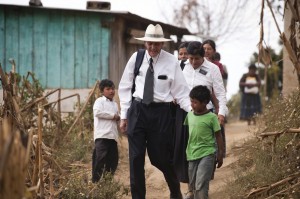 Acerson said she wouldn’t give up her experiences on her mission for the world, that those 18 months were necessary to help her grow, but that not everyone has to choose a mission path to follow a righteous path in life.

Other sisters were out in the field when the age change was announced. They have since returned to a new environment and a new attitude about women serving missions.

Emily Brown is an English major at BYU who served in the Russia Novosiebirsk mission. Her younger sister left on a mission at age 19.

“In some ways, people were spiritually prepared to leave early,” Brown said. “My little sister was ready, and so she left.”

She might have been ready to go, but Brown’s sister had lingering feelings that she was only going because everyone else was.
“My sister doubted the validity of her decision,” Brown said. “She felt she’d gone because everyone else did, and it was hard for her because she worried her decision was based on social pressure.”
Deciding to serve a mission shouldn’t be based on the opinion of others, Brown said. “I think it’s more important to have a spiritual confirmation, to truly involve the Lord in your decision.”
Social changes will likely become more apparent as the LDS culture settles into the new trend and cycle of younger missionaries going and returning.
Perceived pressure will potentially decrease, and perhaps the marriage rates for Utah will increase with the number of younger missionaries returning from the field.