Some lawmakers have said that the 2014 Utah legislative session is on track to be the least prolific session ever, in terms of bills passed. So with the March 13 deadline looming there’s a lot of work to be done.

And far as the big issues go, some have been tabled, some in motion, and others still way up in the air. 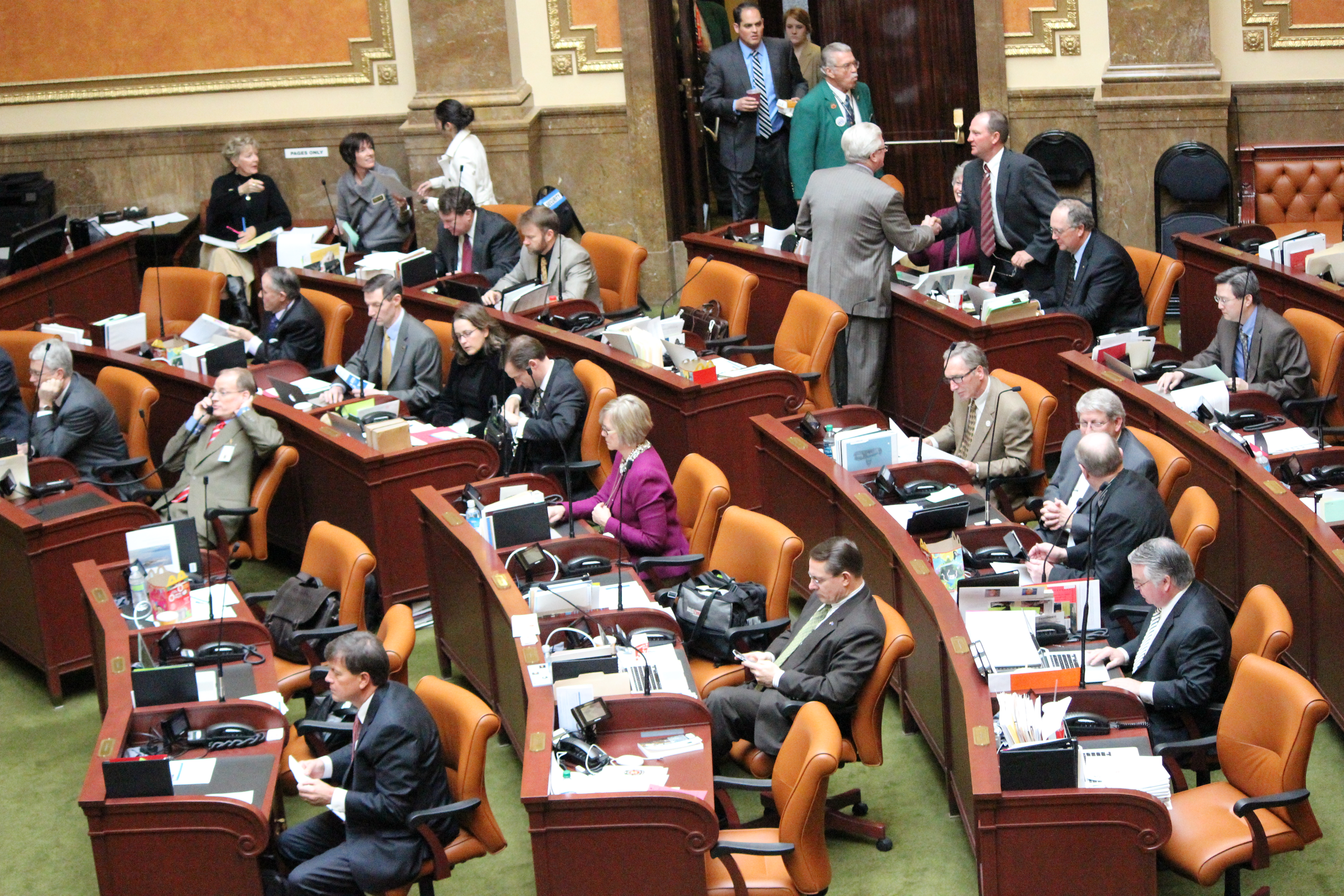 In essence, the compromise keeps the caucus system but opens up the possibility of direct primaries. The provision also allows unaffiliated voters to vote in both the caucuses and primary.

“What’s the problem we are trying to solve?” said Bramble, “It’s greater citizen participation in the process.”

The bill still has to find it’s footing in the House but does appear to have favor with Gov. Gary Herbert who also made statements Sunday.

Count my Vote will not discontinue their petition until the Bill is received and signed by Herbert.

The state penitentiary has been sitting on 700 acres at the Point of the Mountain since 1951. Today, it’s surrounded by booming businesses and thriving suburbs that are itching for growth.

But, unfortunately, overcrowding and age issues have given the prison that same itch.

The committee charged with overseeing the issue has recommended that the prison be moved. Republicans in the house have approved the idea of a move and two resolutions for the move are waiting to be voted on in committee.

Legislators are seriously considering changing the nature of the state’s attorney general position. After allegations against former Attorney General John Swallow, lawmakers would change it from an elected position to an appointed one, in hopes to eliminate the lure and sway of political and financial influence.

Sen. Howard Stephenson, R-Salt Lake City, is the bill sponsor, who applauded the use of drones and the money-saving aspects they propose for law enforcement. However he said that the main purpose of this bill is to protect citizen rights without stepping on the toes of state government progress.

“This bill does not intend in any way to impede or frustrate the ability of the state to invest in and develop beneficial aspects of drone use,” said Stephenson. “This bill is a restraint on the use of this technology solely on law enforcement [by giving] them the tools they need to be more effective in their job, while protecting citizen privacy.”

The bill passed in the senate and is scheduled to be heard next in the house, before finally moving on to the Herbert’s office. The governor said he wants the public to realize that drones are a positive new technology in terms of efficiency and economically. They also want the people to know that significant steps are being taken to show concern for Utahn’s 4th Amendment rights.

Mayor McAdams’ proposal to build a mega hotel downtown aims to keep business conventions from leaving and attract new ones.

Nick Como, the communications director for the Downtown Alliance said, “This hotel would really allow us to get more conventions here and larger conventions, our competitive set of cities is slowly pulling market share away from us and we’d love to bring that back to Utah.”

The bill needs approval from the legislature to enact a post-performance tax that would subsidize the cost of the hotel through rebates. This means the government will not charge the new convention hotel sales or property tax for a period of time in order to help subsidize the cost, which is said to be around $335 million.

Royce Van Tassell, vice president of the Utah Taxpayers Association, said, “The bill as proposed in the past provides a tax subsidy to a new hotel … a better policy would be (to) limit the incentive to when you actually drive new mega conventions to Salt Lake.”

While the bill is still on the calendar, it’s been circled by the house, postponing any more action for the time being.

Lawmakers are sifting through roughly $1.8 million of projects to clean up Utah’s air quality.

Rep. Edward Redd, R-Logan,  said, “If there’s one thing I’ve learned in the last year or two it’s that the air quality in the state of Utah is really complicated. It’s air set has it’s different problems and issues. If we are going to get anywhere in improving air quality, understanding what we are doing is pretty important to make good decisions as a Legislature.”

The current plan is for the $1.8 million to be a one-time funding for the year of 2014 with the idea of bringing the issue back to the table next session if needed.

Gov. Gary Herbert officially announced that Utah will not be expanding the Medicaid program. He says this course of action is in the best interest of the state and that he made the choice only after careful deliberation. Herbert stressed the responsibility to care for the poorest Utahns and he will be seeking federal funds to help in that effort.

House Speaker Becky Lockhart, R-Provo, wants to provide high-tech learning devices for every student in the state. However, her aggressive initiative would cost $300 million, virtually cleaning out this year’s Capitol coffers.

“Digital learning initiative is good, Senate President Wayne Neiderhauser, R-Sandy, said of the plan. “That is going to be an essential element of education going forward. But at least at this point, it is more of a supplemental thing to quality teachers. They are still the most important element in a child’s education.”

The highly-debated non-discrimination and religious liberty issues is for  this session. Senate President Wayne Niederhauser, R-Sandy, said that it simply is not the right time to discuss it. “We’ve made a decision not to address that.” “but we also made a decision not to address religious liberties.” Although Niederhauser has received significant criticism for not allowing the bills to be heard, he says these past months have been a highly-emotional time for these issues in Utah and it would be better to discuss them without the heavy influence of emotion. “We’re trying to make long-term policy – something we don’t have to come back and fix. So, taking a pause is actually a good thing this year, no matter what side of the issue you’re on.”

Lawmakers have been discussing changes to state alcohol law that would bring down the “zion curtain” and make it allowable for alcohol to be mixed in public. Rep. Kraig Powell, R-Heber City, sponsors a bill allowing businesses to take down walls that shield drink mixing from public view.

But in order tear down the barriers, restaurants would need to post a disclaimer outside and on the menu, warning patrons that they pour alcohol  in plain sight. The barriers, nicknamed “Zion curtains,” are only required in some restaurants. Critics say that makes the current rule unfair. But LDS Church leaders this year are asking legislators to avoid changing liquor laws.

Other Bills of Interest

If you want to tip over an ancient rock formation in state park, think again but it won’t be against a Utah law. A park vandalism bill died in committee that would make it a felony to disturb or deface natural formations is on its way to passage.

A bill that would raise Utah’s minimum wage has gone nowhere. Democrats continue pounding their chest about the issue, but super-majority Republicans aren’t listening.

Only the governor’s pen stands in the way of the Colorado Blue Spruce giving way to the Aspen as the street after lobbying from 4th grades in Monroe, Sevier County. The fourth grade class has made at least four trips to the Capitol while Sen. Ralph Okerlund, R-Monroe, carries the bill. It just so happens his granddaughter, Aspen, is a student in the class.

Lawmakers are trying to figure out how to keep the Utah State Fair open. Aging buildings and low revenues have lawmakers worried. They’re willing to grant the funds the needed $750,000 to keep the fair alive, but only after assurances that those funds will be responsibly used.

The age limit to purchase tobacco was killed on the Senate floor and e-cigarettes will get some regulation.

The Associated Press contributed to this report.