A young Afghan girl named Hamida saw her mother die in front of her after childbirth complications. Hamida’s father would not permit a male doctor to help, and there were no female doctors in her village.

“I decided that day I would be a doctor. (But) it was only a dream,” Hamida said. Her aspiration was crushed when her father forced her into marriage when she was a child, defeating any opportunity for an education.

Neylan McBaine, founder of the Mormon Women Project, recounted this story from the Afghan Women’s Writing Project in her address to students at the We For She event on Dec. 4 at BYU’s Kennedy Center.

The Marriott School’s We For She committee said it aimed to prepare students for the 20-year anniversary of the 1995 Fourth World Conference on Women in Beijing. This conference will be held again in March to assess the status of women globally, based on 12 initiatives that were created at the 1995 conference. 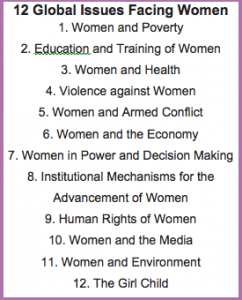 We For She volunteers addressed these 12 issues and proposed solutions. A few of the issues included women and poverty, education and training of women and violence against women.

More than one billion people in the world live in poverty, and the majority of those in poverty are women, according to www.un.org/womenwatch. Educating women was one proposed solution for poverty.

Women who complete college degrees “have greater earning potential and are less likely to be unemployed,” according to utahwomenandeducation.org. More than half of women in Utah with preschool-aged children work, further portraying the importance of a college education for women.

Globally, 35 percent of women experience sexual or physical violence according to the World Health Organization. BYU Men’s Studies suggested 16 ways for men to prevent violence against women. Modeling equitable behaviors in families and encouraging decision-making positions in society were a few.

We For She participants made personal pledges to combat the global issues facing women and shared these pledges on social media with the hashtag #WeForShe.

Lena Rowland, from the We For She committee, said she anticipates future We For She events since the turnout was so great. More than 300 people attended the Kennedy Center event.

More information about We For She can be found here.