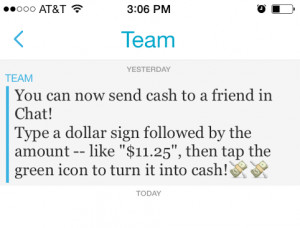 The popular picture-sharing app Snapchat recently teamed up with cash-transfer company Square Cash to allow Snapchatters to send money to their friends through the app.

According to Tech Crunch, the new partnership will open up opportunities in the future to expand Snapchat’s scope from picture-taking to money-making. The new feature gave Snapchat reason to update its Terms and Conditions. While it is common knowledge that no one actually reads the Terms and Conditions, one of our editors was curious about what Snapchat wanted to protect itself from and what it wants users to know. Here are the most interesting or thought-provoking snippets from Snapchat’s Terms and Conditions, Privacy Policy and Community Guidelines.

1. “Snapchat does not transmit any funds and is not a money-services business. To the extent such functionality is made available in the Services, it is provided by an unaffiliated third party.”

The app makes it clear it is not the entity transferring money and so cannot be held responsible for any problems. While the Tech Crunch article indicates that the Snapcash feature is safe, users might want to investigate Square Cash on their own before sending any money electronically. Sending money via Snapcash requires users to make a Square Cash account, and users must be at least 18 to send money.

2. “Just use common sense: Keep sending awesome Snapchats to your friends, and please don’t send Snaps that they don’t want to receive.”

Throughout the Terms, Snapchat speaks to users in a friendly, informal style. Here, they politely ask users to not use the app to harass or irritate others. Doing so protects the company when users do use Snapchat inappropriately but also establishes that they want to build a community with their users.

3. “While we are not obligated to do so, we reserve the right, and have absolute discretion, to review, screen, and delete User Content at any time and for any reason.”

Snapchat can see your snaps and, if there is a problem, can remove it forever, but it doesn’t have to.

4. “You obtain all ownership rights in your User Content. However, by submitting User Content to Snapchat, you hereby grant us an irrevocable, nonexclusive, worldwide, perpetual, royalty-free, sublicensable, and transferable license to use, reproduce, modify, adapt, edit, publish … and display such User Content … subject to any privacy setting you have set to control who can see your User Content.”

If you don’t want Snapchat to be able to use, modify or distribute your snaps as they please, you’d better check the privacy settings.

5. All Snapchat Content is protected by intellectual property laws. “If Snapchat becomes aware that one of its users is a repeat copyright infringer, it is our policy to take reasonable steps within our power to terminate the user’s account.”

Each snap you take or send belongs to you, the same way a novel or painting would. That being said, sending pictures that you claim as your own but were actually created by someone else is copyright infringement. Who knew sending snaps was such serious business?

6. “Because Snapchat is all about communicating with friends, we may—with your consent—collect information from your device’s phonebook and photos. You can revoke consent … by changing the settings on your device … or by simply deleting the app from your device (although we hope you never do that).”

It’s not uncommon for apps to access your contacts, but what I thought was interesting was the suggestion that you can delete the app if you’re not comfortable with Snapchat’s access and the plea to never let it go.

7. “What do we do with the information we collect? The short answer is: Provide you with an amazing set of Services that we relentlessly improve.”

Snapchat may collect information, but it’s all for your benefit. It’s also for the app’s benefit. According to its Privacy Policy, Snapchat uses the majority of the gathered information to analyze trends and learn about its audience, but it is also allowed to share your information with its partner companies and “service providers.” Snapchat does take measures to ensure that your information is not being made public to other users without your consent, however.

8. “By going to those links or by using a co-branded or third-party-branded Service, you may be providing personal information directly to the third party, us, or both.”

Once again, Snapchat is not responsible for how other companies collect or use your information, even if it is a partner company. Other service providers may not be so willing to protect your privacy.

9. “Delete is our default. But—and this is important—you should understand that users who see your messages can always save them, either by taking a screenshot or by using some other image-capture technology (whether that be software or even something as old-fashioned as a camera to take a photo of your device’s screen).” Pictures can also be pulled up by investigators using forensics.

Snapchat wants you to be aware that the pictures are not necessarily gone forever. It attempts to tell you every time someone screenshots a picture, and now it is taking steps to inform you if a third-party app is being used to save your snaps, according to CNN Money. After coming under fire for not doing enough to protect users’ privacy, Snapchat is trying to step up. It can’t protect users from everything, however. “Old-fashioned” technology is untouchable.

10. “We can’t guarantee that messages will be deleted within a specific timeframe. And even after we’ve deleted message data from our servers, that same data may remain in backup for a limited period of time.”

What’s more, an article from Business Insider last year reported that each picture taken through Snapchat is saved on the device, even after it says they are deleted from the app. The snaps are hidden and hard to dig up, but it is not impossible. In response to the accusation, Snapchat said, “Snaps are deleted from our servers after they have been viewed by the recipient,” but made no mention of the saved files on the devices themselves. Snapchat might not be saving your pictures for an extended period of time, but even after they are removed from the servers they don’t actually disappear.

11. “Don’t use Snapchat for any illegal shenanigans and if you’re under 18 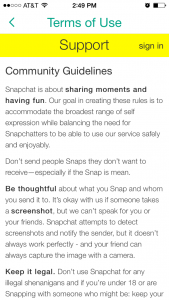 or are Snapping with someone who might be: keep your clothes on!”

By far the most entertaining rule listed in the Community Guidelines. Snapchat does not want to be responsible for your shenanigans, and it’s also protecting itself from sexting allegations. The guidelines clearly tell teenagers not to send inappropriate pictures.

12. “Snapchat attempts to detect screenshots and notify the sender, but it doesn’t always work perfectly.”

I would like to interpret this to mean that Snapchat is worried about your privacy and tries to let you know when your snaps might be saved. Even if it isn’t successful, it’s trying its best.

13. “The same common sense that applies to the Internet at large applies to Snapchat as well: Don’t send messages to someone that you wouldn’t want someone to save or share.”

Snap at your own risk: No matter how private you make your account, you can’t be protected from everything. Snapchat can’t protect you from your own bad decisions or the bad decisions of others. Be smart when snapping.