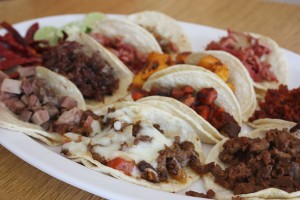 Hole in the wall, or diamond in the rough? What Taqueria el Vaquero lacks in aesthetics, it has in flavor and value.

It’s called a taco-ria for a reason: the tacos. Store owner Jesus Aguayo said, “Carne asada tacos are the most popular item we sell.” And for good reason. Also try the beef quesadilla, the burritos, the tostadas and … everything else.

With tacos starting at $1.25 each, Taqueria el Vaquero is a bargain.

Taqueria el Vaquero is right across the street from Smith’s at 286 North and 100 West in Provo. It’s located in a small strip mall.

One student, Eric Sheffield, said he visits Taqueria every Tuesday for lunch with his co-workers.

“It’s just honestly the best, and most authentic, Mexican food around,” Sheffield said. “And the service is unbeatable. The nicest people. They asked about me when I didn’t make it in with my friends this week!”

Bring your Spanish-speaking friend who is dying to speak the mission language. This could be useful because English speakers in the restaurant are limited.

Add a splash of lime to your order to add extra flavor, and don’t forget the homemade sauces.

Focus on the experience. Watch the broadcasted soccer games in Spanish, get to know people and try the chili peppers.

Owner Jesus Aguayo has been running the “Cowboy Taqueria” since 2006 and said business is still booming.

BYU nutrition professor shares how to eat healthy on a budget