BYU may have some interesting clubs, but nothing compares to the BYU Mime Club from the 1980s. 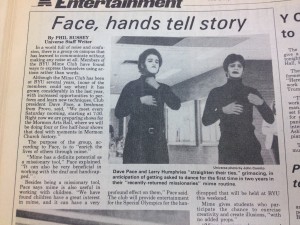 In a world full of noise and confusion, there is a group on campus that has learned to communicate without making any noise at all. Members of the BYU Mime Club have found ways to express themselves using actions rather than words.

Although the Mime Club has been at BYU several years, (none of the members could say when) it has grown considerably in the last year, with increased opportunities to perform and learn new techniques. Club president Dave Pace, a freshman from Provo, said, “We meet every Saturday morning, starting at 7:30. Right now we are preparing for the Mormon Arts Ball, where we will be doing four or five half-hour shows that deal with moments in Mormon Church history.”

The purpose of the group, according to Pace is to “enrich the lives of others through mime.”

“Mime has a definite potential as a missionary tool,” Pace explained. “It can also be very beneficial in working with the deaf and handicapped.”

Besides being a missionary too, Pace says mime is also useful in working with children. “we have found children have great interest in mime, and it can have very profound effect on them,” Pace said. The club will provide entertainment for the Special Olympics for the handicapped that will be held at BYU this weekend.

Mime gives students who participate the chance to exercise creativity and create illusions, “with no added props.”

“Mime is unique when compared to other performing arts,” Pace explained, “because it is a more personal type of art and people watching can relate to what is being created.” Mime is also unique because it avoids the use of props and deals solely with the 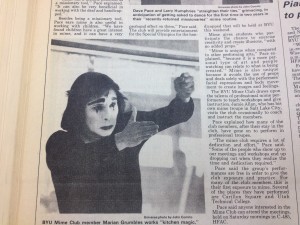 The BYU Mime Club draws upon the talents of professional mime performers to teach workshops and give instruction. Jamie Allen, who has his own mime troupe in Salt Lake City, visits the club occasionally to coach and instruct the members.

Pace explained how many of the club members, after their stay in the club, have gone on to perform in professional troupes.

“The mime club requires a lot of dedication and effort,” Pace said. “Some of the people who show up to our meetings and workshops end up dropping out when they realize the time and dedication required.”

Pace said the group’s performances are free in order to give the club exposure and practice. For many of the club members this is their first exposure to mime. Several of the places they have performed are Carillon Square and Utah Technical College.

Pace said anyone interested in the Mime Club can attend the meetings help on Saturday mornings in C-485, HFAC.