The BYU women’s basketball team is here, and it is here to win.

The Cougars opened up WCC tournament play at the Orleans Arena in Las Vegas with a resounding 77-51 win over the Pepperdine Waves. 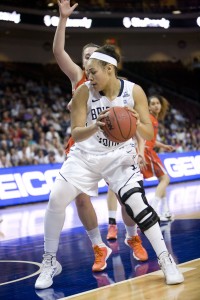 In an arena packed with BYU fans, the Cougars came through with a solid team effort. Four players scored in double figures, led by sophomore Lexi Eaton and junior Morgan Bailey, who had 17 points each. Senior Jennifer Hamson chipped in her usual double-double, finishing with 13 points and 12 rebounds, and fellow senior Kim Beeston scored 10 points while dishing out a game-high seven assists.

“They don’t care who gets the glory — they just go out there and play the game, and whatever mismatches they have, they take advantage of them,” said BYU head coach Jeff Judkins. ” That’s why this team is really where they are right now.”

When Hamson was called for two quick first-half fouls, Bailey stepped up. Bailey had nine points and six rebounds in the first half alone.

“The kid is one of the best low post players I’ve ever coached, period,” Judkins said. “When Jen (Hamson) gets in foul trouble, Morgan takes it upon herself, and Lexi (Eaton) does too, knowing they have to score a little bit more and be more aggressive.”

The Cougars took control of the game from the tip-off, leading 42-22 at halftime.

Pepperdine head coach Ryan Weisenberg had some high praise for them.

“Wow. That’s a heck of a team, BYU,” Weisenberg said. “They’re very well coached and played hard from the beginning. We went into a gunfight with a knife. My hat is off to BYU, and I’m expecting them to win the whole thing now.”

Bailey also has high expectations for her team.

“The goal for our team is to play hard every game,” Bailey said. “We obviously want to win and put ourselves in a great position to go to the NCAA tournament.”

The win means BYU will face University of the Pacific in the semifinal round of the WCC tournament on Monday. Pacific beat Portland 84-72 in the other half of the quarterfinal round earlier today. KiKi Moore exploded for 28 points and 7 rebounds in the win, while Kendall Kenyon added 12 points and nine boards.

Pacific beat BYU at home earlier this year 75-62, but the Cougars responded with an impressive 88-57 win on the Tigers’ court a few weeks later.

“It’s going to be a great matchup,” Judkins said. “When they played us at home they came out and really shot the ball well. They are quick and are going to drive and try to make us play their game, but if we get the ball inside like we did at their place then it will be a good opportunity for us. It’s going to be a game that I think both of us have been waiting for.”

In the loss at home to Pacific, Hamson led the Cougars with 22 points while Sam Pettinger led the Tigers with 16. In Stockton, Calif., Hamson once again led BYU with 25 points and Pacific’s KiKi Moore had 17.

The game will be Monday, March 10, at 2 p.m. (PST) and will be broadcast live on BYUtv. If the Cougars win, they will advance to the WCC Championship game the next day at 1 p.m. (PST).