Reyes said Tuesday that his office is paying an outside legal team now but has limited resources. 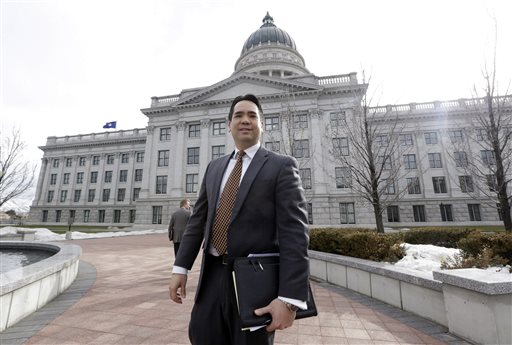 “That money is for our discretion,” Reyes told The Associated Press on Tuesday afternoon. “We’d like to be able to make sure that we have it for other things that arise, too.”

Leaders in Utah’s Republican-controlled Legislature have said they’re committed to protecting the state’s constitutional amendment banning gay marriage, as has Gov. Gary Herbert, who is also a Republican.

A federal judge overturned the ban in late December. More than 1,000 gay couples rushed to wed until the U.S. Supreme Court granted Utah’s request to halt the weddings in January.

When Utah appealed the decision to the Denver-based 10th Circuit Court of Appeals, Reyes hired three outside attorneys to assist with the state’s case.

They could cost up to $300,000 through the appeals court. If the case works its way to the U.S. Supreme Court, that cost could double, the attorney general’s office has said.

Reyes, a Republican, said the total cost for the special counsel is still uncertain, so he’ll likely ask lawmakers to help pay that cost next year when he will have a better estimate of the bill.

He made the comments shortly after making a case to a legislative budget committee that his office needs to hire several full-time attorneys for some of its usual operations in order to offset heavy workloads.

The same-sex marriage case did not come up during the committee’s hearing Tuesday, but lawmakers on the Executive Offices and Criminal Justice Appropriations Subcommittee have been briefed on the potential costs.

Kearns Republican Rep. Eric Hutchings, the committee’s chairman, said after the meeting that lawmakers intend to put some money toward the legal costs this year and pay the balance next year.

“There will definitely be some extra funding put in, just simply because it’s an important issue,” Hutchings said. “We don’t want to stand in the way of it being done right.”

Hutchings said they’re still not sure what the cost will be, but legal bills can rise quickly and they’re expecting the bill to be significant.