BYU released its annual Clery Act Campus Security Report this past month, which the U.S. Department of Education requires all universities that receive government funding to publish. 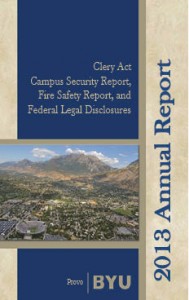 Upon investigation of BYU’s crime statistics for the past academic school year, some alarming numbers arise.

BYU Police Officer Lt. Arnold Lemmon, who is the officer in charge of BYU’s report, explained while this number may initially be a cause for concern, with additional information initial concern will vanish.

“In this case, 14 of those cases were perpetrated by the same person, to 3 different individuals, on 14 different rotations,” Lemmon said.

Other than that outlier, BYU’s Clery Report will help students and parents rest easy at night. BYU remains one of the safest campuses in the nation.

The Clery Report is named after Jeanne Clery, who was raped and murdered in her dormitory at Lehigh University in Bethlehem, Penn., in April of 1986.

After Clery’s death, her wealthy family discovered that the crime statistics released by Lehigh University were not reflective of the actual crimes committed.

“There was no requirement at that time to report crimes like the Clery Report today,” Lemmon said. “Universities were cooking their books with crime stats. The motivation was the lower the crime rate, the more parents would want to send their children there.”

Lemmon defined the term “cooking their books” as deceptively skewing crime numbers. For example, before the Clery Report universities could report multiple different burglaries that occurred in the same building as one crime. This allowed the university to have a safer perception than was the reality.

The Clery family sued Lehigh University for misrepresentation of crime statistics, which almost caused the university to go out of business. The Clerys used their settlement to pay for lobbying at local and national levels for legislation requiring universities to publicly and accurately record all crime statistics.

Lemmon, who is in charge of compiling and producing the report for BYU, explained how this law has changed the way universities across the nation handle the protection of their students.

“It’s sad but unless the government mandates it, it doesn’t get done,” Lemmon said. “The Clery Report and other parts of the law have mandated universities to have emergency notification systems and evacuation plans. It has helped make institutions more accountable.”

“I look at the report every year to see what is happening at my university and where the safest parts are,” Morris said. “It helps me stay informed about what is going on. It helped me determined where I should live.”

Despite the improvement in safety and crime reporting ushered in by the Clery Report, there are many detractors who claim that the report is too complicated and time-consuming.

“Every couple of years they (Congress) add some more requirements to it,” Lemmon said. “It has developed to the point where the report needs daily attention.”

For example, Lemmon explained the complicated new geography mandates that require universities to acquire crime statistics for areas outside of campus boundaries.

“They now require for you to acquire crime statistics for public property immediately adjacent to the institution’s property,” Lemmon said. “The public property ‘immediately adjacent’ is defined from the sidewalk nearest to campus and all the streets or property until the next closest sidewalk. No police department keeps specific crime statistics like this. It’s basically impossible to acquire.”

Although producing the report has been time-consuming, Lemmon doesn’t have any issue with the deliberate gathering of information now required by the Clery Report, but rather said it is valuable.

“I am hard-pressed to find anything in this report that is a waste of time,” Lemmon said.  “Bad police work means bad case law. If you can help just one person, then everything we have to do is worth it.”

Clery Reports for every university can be found at http://clerycenter.org/clery-act-compliance.