BYUtv aims to draw families around the television with its original series “Granite Flats,” which premiered on Sunday.

The eight-episode series is BYUtv’s response to the dearth of entertaining and appropriate programming for parents and children to collectively enjoy. A period drama with a twist of science fiction, “Granite Flats” follows a recently widowed mother and her 12-year-old son who move to Granite Flats, Colo., after the mysterious death of their Air Force pilot husband and father.

According to Derek Marquis, executive producer of the show and managing director of BYUtv, “Granite Flats” is the programming families have been waiting for.

“There has been a large empty space where primetime family-oriented television used to be,” Marquis said in a recent press release. “There’s a significant audience hungry for a dramatic series that families can watch together without concern about inappropriate subject matter.” 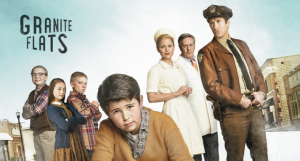 The challenge the producers of “Granite Flats” face is to effectively engage both younger and older audiences — not an easy task, according to Scott Swofford, the show’s executive producer and director. Swofford said he believes the key is to infuse each episode with timeless and ageless elements.

“I’m trying to get to the point where we’re as sophisticated as the adult programming but we appeal to kids,” Swofford said. “I think the way to do that is to get suspense and romance and adventure and discovery back into it without all of the stuff BYUtv can’t do.”

While Swofford, a BYU motion picture and TV graduate, brings years of production experience to the set, the idea behind the series was conceived by a more recent BYU graduate, James Shores, an award-winning media arts major who graduated in 2011. Shores made a 20-minute film called “Heaven Under a Table” on which “Granite Flats” is based, and both he and Swofford are listed as co-creators of the series.

“James came aboard and wrote a great pilot script for it,” Swofford said. “His ideas are solid and so we kept him involved — in fact, clear up until the last day he sat next to me in a chair and we would look at each other after the takes to make sure we were being true to the characters.”

Although a college-aged student was involved in the production of the series, it remains to be seen whether “Granite Flats” will catch on with other members of the demographic. BYU student Clarissa Gregory said she was skeptical about the show but warmed somewhat to the characters over the course of the first episode.

Swofford admitted “Granite Flats” might not appeal to the “‘Mad Men’ crowd” but said he hoped it would hit the mark with BYUtv viewers by focusing on the stories of small-town people. As for college students, Swofford said it depends on what they are used to watching.

“If they liked the ‘X-files’ and ‘The Wonder Years’ and ‘Twin Peaks,’ then we’re in the ball park,” Swofford said.