Philanthropy is generally associated with wealthy people, like Bill Gates or Oprah, but now even the poorest of college students have the opportunity to participate in philanthropy through the Be A Philanthropist project.

The Be A Philanthropist project is offering microgrants up to $300 to help implement charitable ideas that impact the community. The project is funded by the Sorenson Legacy Foundation and supported by the Grantwell program of the Marriott School of Management.

Wilson Ashton, a graduate student in public administration, leads the project and hopes it will help inspire people to look at the world differently. 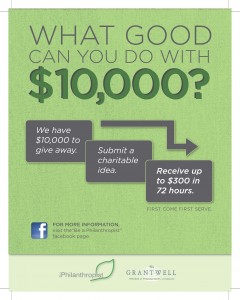 Change the world with a microgrant

Applying for a grant through the Be A Philanthropist project is fast and easy. The project’s website, beaphilanthropist.com, has a five-minute instructional video and an application that takes 10 minutes to complete, Ashton said.

Once the application is received, three project team members review it and applicants will have a response within 72 hours. Applications are being accepted until March 31, or until the money runs out.

Specifically, the project looks for small projects that will have a high impact on the community. These small projects generally go unnoticed and unaided by larger organizations but can still make a real difference.

Alisa Hardy Orton, a graduate student in public administration, works on the Be A Philanthropist project. Orton hopes the project will change the way people view philanthropy.

Get funding for simple solutions

Some ideas provide a solution to a problem. One project that received funding helped pay for lights in the parking lot of a women’s shelter. The lights will improve visibility and keep the area safer.

Other ideas inspire and encourage. An approved project funded the purchase of positive image posters to hang in local schools to inspire students and teach them to value themselves.

Claire von Neida, a graduate student in public administration, is on the team that reviews each application to determine its merits. Since she started reviewing grants, von Neida has been impressed with the creative ideas she has seen.

“We are the change makers, we are the future,” von Neida said. “We have the power to see a problem or have an idea in the world and then go make that happen. And that is exactly what this project is pushing for.”

The project’s goal is not only to make a difference in the community, but also to create a habit of giving. Creating a charitable mindset while on a tight student budget will help students create a habit that will follow them for the rest of their lives.

“(I) feel like I’m actually making a difference,” Ashton said. “I’m helping people understand that they can actually be more effective … that service is not just about doing a service project. They can really make a lasting impact on other people’s lives.”

Office of Belonging opens its doors: new curriculum and a student council