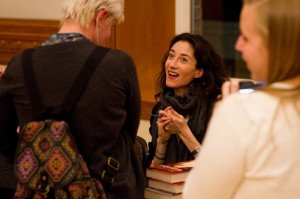 Those unexpected moments when the mind relaxes bring bursts of creativity for one New York Times bestselling author; for another, it took 15 years to develop the paranormal world of her book.

Oliver said her most extraordinary ideas come to her in the most ordinary places.

“I’m often inspired at the gym or while taking a shower, which actually has some basis in scientific fact–it’s called the shower principle,” Oliver said. “Sometimes when your conscious mind is able to relax, your unconscious can synthesize new ideas.”

Such was the case for her “Delirium” trilogy, the final installment of which, “Requiem,” was released March 5.

Oliver’s dystopian series follows a young girl, Lena, who falls in love in a society where love is seen as a disease. Lena must escape her city before she is treated for “amor deliria nervosa,” commonly referred to as “the delirium.” Oliver said the concept for the trilogy came to her in pieces.

“I was reading a book by Gabriel Garcia Marquez and in it there was a quote that all great books were about love or death,” Oliver said. “I was like, ‘OK, I just wrote a book about death, what if I write a book about love?’ Not just a romance, but an examination of love and its place in society and in families.'”

Oliver said it wasn’t until several days later, as she ran on a treadmill, that synthesis finally occurred.

“This was years ago during a swine flu panic and I started thinking about epidemics and how, if we look at the signs of romantic or passionate love, it really has a lot in common with psychiatric disorders that we currently treat with medication,” Oliver said. “I left the treadmill and went home and wrote the first three pages.”

BYU student Jenna Cooper said she enjoys Oliver’s books because they transport her to another world.

In contrast to Oliver’s rapid strokes of inspiration, Kiersten White, a 2004 BYU English literature alumna said she developed and tweaked the world of “Mind Games” for 15 years.

“The first two novels I wrote were playing with the same concept, so I decided to take the best parts from the two scrap novels and make an entirely new book with it,” White said. “I actually wrote the first draft in nine days. When I found the right people to tell the stories is when it actually worked.”

White tried her hand at children’s and middle-grade books before finding her voice in young adult literature. Her first series, the “Paranormalcy” trilogy, became a New York Times best-seller. “Mind Games,” the first in a new series, debuted in February.

“Mind Games” depicts two sisters with supernatural powers who are trapped in a school that uses them as tools for corporate espionage. Although BYU student Lauren Widtfeldt hasn’t yet read “Mind Games,” she said she loved White’s previous books.

“She’s got such a unique voice in everything that she does. I love that she’s not afraid to make fun of herself as an author and in the book itself,” Widtfeldt said.

White said she sees fantasy literature as an elevator, one that heightens normal human experiences.