Retaining a second language while trying to juggle classes, homework and work can be difficult. Watching foreign movies is an effective way of keeping the language fresh without much effort.

According to Y Facts, nearly 70 percent of students on BYU campus speak a second language, and many of them find movies and TV shows helpful in learning everyday language and expanding their vocabulary.

Brenda Obando is a BYU student from Costa Rica. Though she is a foreign student, she feels comfortable with English. 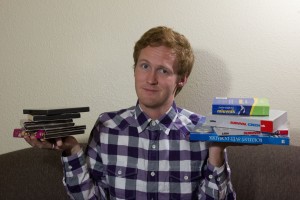 “While I was learning English I became obsessed with the show ‘Smallville,'” Obando said. “The newest episodes were subtitled only, so I started hearing the dialogues and found myself sometimes even repeating them.” Recent research affirms Obando’s learning experience.

Research conducted by Sven Van Lommel, a research assistant at the Fund for Scientific Research-Flanders in Belgium, concluded that subtitled TV shows can considerably help with expanding one’s vocabulary of another language.

“Watching movies and shows in English helped me a lot with the vocabulary,” Obando said. “If I have subtitles in my language, I will get the actual meaning of the words, and if I hear them often in the movie, I can remember them and use (them) later.”

Obando always recommends her friends watch TV in the language they want to learn, especially if they have seen a movie or a show before in their native language.

Another plus of watching movies and shows in a foreign language is that they expose viewers to the real language that often differs from the one in textbooks. Nicole Lier, a UVU student from St. George, wished she was exposed more to the real language before going on her mission to the Czech Republic.

“I spent two months in the MTC learning Czech and felt like a pro,” Lier said. “And then I came to Prague and realized this is not the language they taught us.”

Kinantia Subiantoro, on the other hand, knew there are things that are hard to learn just by going through language textbooks. Subiantoro is from Indonesia, and she has been in the United States for two-and-a-half years. She grew up in Jakarta, where she had cable TV at home, an amenity that helped her get familiar with English.

“In school I learned formal grammar and vocabulary,” Subiantoro said. “Watching movies and series, I learned slang and how people talk in real life.”

Foreign movies and shows are available with subtitles on DVD; however, the key is to both listen to the language and connect the words to their meaning in the subtitles, rather than just reading subtitles in which one ignores the foreign speech altogether.

“Everyone watches movies in English, but it doesn’t help everyone,” Subiantoro said. “It depends on whether you want it or not. Sometimes you just read the subtitles and ignore what they are saying.”

Sometimes students don’t have time to watch TV. It’s all right to do errands and listen to the TV in the background — the brain is still getting used to the flow of the language.

Alberto Puertas, from Trujillo, Peru, is an academic and career counselor at BYU. Many foreign students come to Puertas seeking academic advice. Puertas knows how they feel because he, too, was once a foreign BYU student.

“If you are learning Spanish, watch a Spanish movie; if you are learning Russian, watch Russian movies — anything that can add to your comprehension and help your listening abilities,” Puertas said. “Movies do play a role in that.”