The Cougars overcame an 11-point half-time deficit and escaped with a narrow victory over the Pepperdine Waves on Thursday night.

Although they got off to a slow start, scoring a season-low 20 points in the first half, BYU came back to outscore Pepperdine 43–30 in the second half.

“It was a hard-fought win, and our guys should be really proud and excited that they were able to win the game,” said BYU Head Coach Dave Rose. “I don’t think there is any doubt about the fact that we hung in there.”

Despite having eight stitches above his eyebrow after taking an elbow during practice, Davies finished with 20 points, 12 rebounds and three assists. He was able to carry the team, especially through the first half as he scored 12 of their 20 points.

“When Brandon is performing well it creates so many opportunities for everyone else, on offense and defense,” Haws said. “He really can do it all out there.” 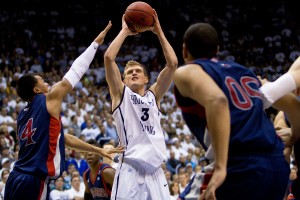 Haws scored a game-high 21 points and made huge buckets down the stretch to get the rhythm going in the second half. Haws has pulled through for his team at the end of close games consistently and takes on the challenge when needed.

“It feels so good to win a close one like that,” Haws said. “We’ve been on the other end of that, and we know how it feels to lose it so it just feels good… I’m always going to do whatever I can for the team so if that means making shots late in the game then I’ll do my best.”

Carlino’s big three-pointer with 14 seconds might’ve given BYU a 63–59 lead, but his two free throws with one minute left gave the Cougars a one-point lead after Pepperdine’s Jordan Baker threw in a desperate three-pointer. Regardless of having a frustrating first half, Carlino finished with 12 points, five rebounds, four assists and three steals to continue his strong conference play.

“I kind of have mixed emotions right now, because I’m disappointed in the way we played most of the game,” Carlino said. “But it’s good to get out of here with a win.”

Waves’ junior guard Nikolas Skouen was shooting lights out, 13 points (5–6 FG, 3–4 3 FG), in the first half, but Anson Winder’s tough defense kept Skouen to only three points in the second half.

Winder made BYU’s first 3-pointer at the 15:55 mark of the second half which cut the deficit to eight and Haws’ jumper with 6:24 left to go gave BYU its first lead, 49–47, in the second half.

“Once we got that lead I thought our guys got on top of it and it felt good to get that lead down the stretch,” Rose said. “I’m really proud of the guys finding a way to win this game. We have a few issues to address, definitely, but we’ll take this win and go home to get ready for Santa Clara.”

Following Thursday night’s win BYU holds a 17–6 overall record and a 7–2 record in the WCC.

BYU will return home to tip off against Santa Clara at the Marriott Center on Saturday at 7 p.m. MST. The game will be broadcast live on BYUtv.