The home game winning streak has been extended as the BYU women’s basketball team beat St. Mary’s on Thursday night 66–58 in the Marriott Center.

BYU improves to a 5–2 record in West Coast Conference play (14–6 overall) as they give St. Mary’s (14–6 overall) their second WCC loss. St. Mary’s is now second place in the WCC behind Gonzaga. BYU is in third place.

“It was a good win for us,” BYU Head Coach Jeff Judkins said. “We needed that, and hopefully we can build off of that.”

The Cougars were led by their captains, guard Haley Steed and forward Keilani Unga. Steed dished out nine assists and scored 14 points, four of which were three-pointers. Unga scored 13 points and grabbed four rebounds.

“I thought Keilani had one of her best games,” Judkins said. “Not just scoring 13 points tonight, but her toughness. I hope that Keilani builds on this and realizes what she does for this team with her toughness and with her aggressiveness.” 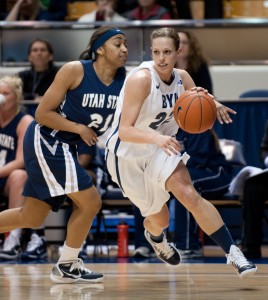 Unga showed that she was ready to battle it out with the Gaels right from the start as she ripped the ball at the tip to get the first possession. Even with four fouls at the end of the game, she continued to compete.

“I knew I had to be aggressive going into this game,” Unga said. “Everyone told me that I needed to be scrappy and aggressive, so I was.”

The game was very physical and had players on both teams in foul trouble. Both Jennifer Hamson and St. Mary’s forward, Jackie Nared, fouled out. Both teams shot 18 from the charity stripe, and BYU made 13 of its free throws while St. Mary’s made 12 of their attempts.

BYU started off the game strong behind Unga’s effort. Forward Stephanie Seaborn scored the first points of the game with a shot from beyond the arc. The Cougars pushed the lead to 10–3 before the Gaels answered back with a 10–1 run to gain a two point lead. St. Mary’s was up by seven points with 5:46 left in the first half, their largest lead of the night.

The Cougars continued to play hard as they came back late in the first half. With a minute and a half remaining, center Jennifer Hamson completed a three-point play to tie the game at 29. St. Mary’s scored six quick points to push the lead again. As the buzzer was about to sound, Steed knocked down a three-pointer to cut the lead to only three points going into halftime.

“I think plays like that are just momentum builders,” Steed said. “Rather than feeling down at halftime that we gave up a three, it’s more like we got the last punch in before halftime.”

The momentum carried on into the second half as the Cougars opened up with three straight scoring possessions, two from Steed and one from Unga. BYU took the lead and was able to keep it for the remainder of the game. St. Mary’s got within five points with 3:46 remaining, but that was as close as the score got. As the time was running short, the Gaels fouled the Cougars three times. BYU made 5–6 of those free throws to seal the victory.

“When we come out in the second half and we play well in the first five or seven minutes, we usually win,” Steed said. “And so we knew that was going to be the turning point of the game. We knew if we were going to win, we had to win in the first five minutes.”

This win is big for the Cougars to overcome the loss to San Francisco on Saturday and start another winning streak.

“We needed this so bad just to build our confidence as a team and to move forward from that loss,” Unga said. “So now we can just have confidence in one another and in our coaches.”

The Cougars will look to build off of this victory in Santa Clara as they face the Broncos on Saturday.