Every four years, the nation’s citizens can form and exert political opinions by casting their votes for the next president. These opinions spill over from the voting booths to conversation, clothing choices and, most permanently, social media.

Many people have spent the past election season posting their opinions on their Facebook, Twitter and other social media accounts.

Joanna Pace, a dual major in elementary and early childhood education, most recently from Belgium, said she is sick of the political statements clouding her Facebook page.

“I don’t think that most of my friends are very educated about what’s going on. Their comments don’t mean much to me. I’d rather research it myself,” Pace said. 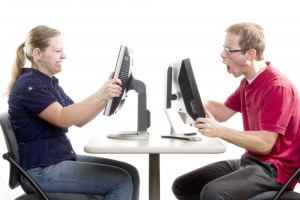 [/media-credit]She said the posts on her Facebook feed are filled with comments from her friends, who bash the opponent they don’t support while not saying anything constructive about the candidate they endorse.

“De-friending them is my first reaction,” DeMille said.

Jessica Callahan, a graduate in physiological and developmental biography from Oxnard, Calif., decided to write her more liberal political thoughts in her blog.

“Because my family doesn’t know my blog exists, I felt it was safer,” Callahan said. “I was worried, because I have a lot of conservative friends, how their personal opinion of me would change.”

Callahan felt that posting her political opinion in her blog was an acceptable social media form.

“On Facebook, you should censor yourself a little bit more,” Callahan said. “There should never be any remarks that are generic statements (about either political party) that aren’t actually factual. It’s OK to post articles and express, in a non-confrontational manner, your political beliefs.”

Steve Warner, a political science major from Orem, said he felt posting and commenting on strong political opinions on Facebook was a good way to get informed.

“When you post about the debates on Facebook, that’s something that actually matters instead of … your dog in a cute little outfit,” Warner said.

There were times when Warner felt he should withhold his political opinions. He said he was at a dinner with a more liberal family and decided that the conservative meme he found that day would best be kept to himself.

Warner said that he never permanently judges others for their political opinions.

“In the end, it doesn’t really matter. We’re (students at BYU), all God-fearing people, and we all know who will be ‘president’ in the end,” Warner said.

How to reduce stress with breathing exercises