The subtle crunch of orange and red leaves fills the air as students leave campus for the evening. The crisp breeze is a reminder that fall has finally made its way into Utah Valley, meaning one thing: it is time to carve some pumpkins.

BYU students are ringing in the fall season with pumpkin carvings suited for an art museum. These orange gourds are decorating the doorsteps of several students’ homes and filling apartments with joy, as friends and family come together to celebrate this classic fall tradition.

Casey Arnold, a 23-year-old from Allen, Texas, majoring in environmental science, said he creates a blueprint before embarking on his pumpkin carving adventure and that jack-o’-lantern faces are for the inexperienced. 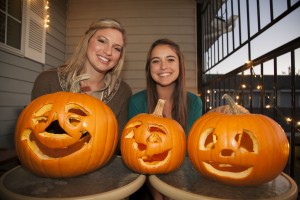 [/media-credit]”I feel like faces are for kids, and as we grow up the carvings become more like scenes. For example, a dark and stormy night scene with dead trees, some big clouds and a lightning bolt,” he said.

Caleb Lyman, a 23-year-old from Parker, Colo., majoring in visual arts, conducts his pumpkin carvings in a similar manner, abandoning the original jack-o’-lantern face in favor of carving out a creative landscape or portrait.

“Two years ago, I carved a pumpkin of Hagrid, but he had a big hip-hop medallion around his neck,” Lyman said.

“If I don’t do a scary face, I will do something quasi-artistic,” he said. “Do something fun, like the jack-o’-lantern face, but give the face a twist.”

While carving the pumpkin is fun for Brigham, he said the seeds inside are the real treat. He also said there is nothing like taking a kitchen spoon and scooping out the pumpkin seeds that are waiting to be salted and roasted.

“Man, I just love making the pumpkin seeds,” he said. “Scooping the seeds out of the pumpkin is my favorite part.”

Elizabeth Daun, a 20-year-old from Cincinnati, Ohio, majoring in nutritional science, said pumpkin carving has been a fun family tradition. Daun said her mother taught her creative ways to bring pumpkins to life. Daun recommends using a toothpick to suspend carved parts within the pumpkin, making a three-dimensional image. She used the eyeball as an example. Daun said you carve out the eyeball for the pumpkin’s face, place it on a toothpick and suspend it inside to give it more dimension.

For Daun, this is a family tradition she plans to continue.

“I have good memories with family, and it is a good bonding activity,” Daun said.