Young American children repeat the annual rhyme ‘trick or treat.’ From a very young age, they learn that once a year sugar can be earned by simply dressing up and asking for it.

Halloween food ranges from homemade goodies to widely popular packaged candy. Everyone has their preferences, but some treats have the power to take Halloween enthusiasts down roads of nostalgia. Those foods and experiences are as unique as the individual who remembers them.

Jeanie Cook remembers her childhood Halloweens near the north pole. As a native of the northern tribes of Alaska, getting Halloween treats meant braving freezing temperatures. 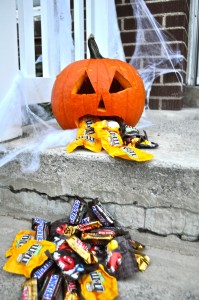 [/media-credit]”Growing up in rural Alaska, dressed in our animal skin parkas and boots, our only costume was a little plastic face mask,” Cook said. “My favorites were a cat face and a pig face. Our favorite house in the neighborhood was the one handing out homemade popcorn balls. I hated the house that just dumped a cup of loose popcorn into our homemade trick or treat bags, which were usually a pillowcase or brown paper grocery store bag. We never had cute pumpkin containers then. At least not in the village.”

Although the holiday is revered as far north as Alaska, it is still regarded an American holiday. Colin Rivera, a media music major at BYU, moved to Provo from England.

“In England, Halloween is so lame,” Rivera said. “Some college kids and high school kids throw parties, but that’s pretty much it. Halloween is seen as an American thing.”

Now that Rivera has settled into the October tradition, he is enjoying the holiday.

“What’s my favorite candy?” Rivera asked. “All of the above.”

Megan Ward, a senior studying human development and family studies, gets into the Halloween spirit by making homemade treats.

“Rice Krispy ghosts are always my favorite,” Ward said. “We would make them on Halloween before we went trick or treating. You got to sculpt your own creepy ghost from a glob of gooey Rice Krispy deliciousness. There is nothing better.”

Some people like to try a semi-homemade approach to their goodies by taking packaged favorites and personalizing the taste. Karina Marcella, a graduate student at BYU, has a very simple recipe to kick the classics up a notch.

“The candy pumpkins and the candy corn have always been one of my favorites,” Marcella said. “A friend of mine told me to mix them with peanuts and it turns into a really nice sweet and salty mixture.”

Not everyone was crazy for sweets as a kid. Brian Berthold, an on-air marketing producer at BYU Broadcasting, remembers his favorite house to visit during Halloween as a child.

“Now my favorite is Reese’s Peanut Butter Cups,” Berthold said. “As kids, we always enjoyed going to the dentist’s house to get our toothbrush and toothpaste.”