Col. Brent A. Johnson spent his life being the best at whatever he did. Growing up in Burley, Idaho, Johnson trained to be the best wrestler at his high school he could be. His successful career launched him into the world of intercollegiate wrestling, where he represented the Air Force Academy in Colorado for four years as one of the top athletes. 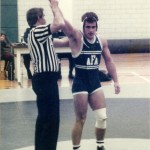 [/media-credit] Col. Johnson as a wrestler for the Air Force Academy.

In February of 1984, his final match brought him to the mats of BYU’s Smith Fieldhouse. There to cheer him on were his biggest fans: his coach, his father and his mother. Johnson never expected to find himself back on that same floor with his same loyal fans watching from the bleachers. The only difference this time was the gold “retired Air Force” medallion dangling from his uniform.

After nearly 29 years of service in the U.S. Air Force, Johnson’s retirement ceremony in the SFH auditorium represented the next significant transition in his life, much like his final wrestling match transitioned him to his career in the Air Force.

Johnson served for three years as BYU’s Detachment 855’s commander. As his final assignment, he said it was his “greatest accomplishment.”

[/media-credit] Col. Johnson leads a flight of cadets in Alabama.

“This assignment was phenomenal when it comes to shaping people, dealing with people and being able to set a lasting legacy,” he said.

The most rewarding part of his job at BYU was when Johnson went to field training in Alabama and Mississippi this summer. He was in charge of taking nearly 400 cadets through a four-week training experience.

BYU’s average of selected cadets is usually higher than the national average. This year BYU clocked in at 100 percent, which has never been done before.

“It was amazing. I never thought it would happen,” Johnson said.

Johnson’s wife, Tami, who has lived in 24 different homes between her father, who was in the army, and her husband, said that he found all of his success, both at work and in the home, by focusing on strengthening relationships with other people.

“He didn’t waste time on things that didn’t serve a purpose, that either weren’t family-involved or didn’t serve a purpose in different degrees of his training,” Tami said. “It didn’t have to be hours and hours, it can be 30 minutes where (he) gave somebody (his) undivided attention and really focused and had conversations.”

Johnson’s youngest daughter, Camden, a 15-year-old sophomore at Springville High School, said one of her favorite memories was going salmon and halibut fishing with her dad while living in Alaska.

“Going fishing with him was a ton of fun,” Camden said. “He taught me how to fish, although we didn’t always catch something when we went. My dad is awesome.”

Kjersten, a student applying to advertising at BYU, said she remembers one Friday night after a swim meet, she found herself with no choice but to go on a spontaneous family hiking trip. Shower-less, she went, and now considers it one of her favorite memories of her dad.

“I was not happy about it at all, and they made me go the whole weekend,” Kjersten said. “But now it is one of the best hiking memories because he made me do it, but also made it so that it was a fun time.”

While stationed in England, the Johnsons spent family vacations traveling through Europe.

“My favorite memories are when we made memories while traveling,” Tami said. “That was one of the advantages we found in living overseas with the military.”

Johnson’s eldest child, Chazman, 23 and a senior airman at Hurlburt Air Force Base in Florida, said he wanted the same things his family had growing up for his own future family — a good quality of living and a stable job.

“Eventually I decided that that was what I wanted for my life,” Chazman said. “I wanted the opportunity to help serve others and protect our nation’s freedoms. I know that is something my dad always wanted.”

Johnson would often say “fast is slow, slow is smooth” to teach self-control to his son. Chazman said that advice helps him be the best combat controller he can be.

Throughout his career, Johnson excelled and was often ranked at the top of his class in academics, training, leadership roles and combat missions. During pilot training earlier in his career, he was assigned to fly the F-15, the world’s most powerful fighter jet.

“The fighter aircraft will go to whoever is ranked the very best in class,” Johnson said. “I think if you get any type of fighter air craft, you are happy and ecstatic no matter which one it is.”

Needless to say, Johnson was ecstatic with the chance to pilot the F-15 over Iraq and Bosnia for many years. In total, he spent over 275 hours in combat air.

Despite his busy schedule, Johnson found the time to race in the New Zealand Iron Man, multiple half-Iron Mans and a few marathons.

“You don’t have to go fast, you just have to go,” Johnson said of the Iron Man. “That’s what I used to tell myself.”

He said that those races required many lonely hours of training. He said that the day of each race brought different people and cultures together, something he also tried to incorporate throughout his service.

“I believe that people are the source of all goodness in this life and to getting things done,” Johnson said during his closing remarks at his retirement ceremony. “Take care of them, believe in them, recognize them (and) reward them.”

Johnson then characteristically summed up his Air Force career by placing family above all else.

“I’ve learned, after serving in all the fantastic locations, that in the end, none of that really matters except for your family,” he said. “Always remember your family.”