The rich, colorful smorgasbord of original flavors at BYU Creamery are enriched with memories and traditions. The four distinct locations dispersed throughout campus allow friends, fans and students of BYU to start off the semester right, with a hand-dipped ice cream cone.

BYU Creamery was founded in 1948 and originally only sold milk. Soon though, ice cream and cheeses were added to the dairy line, giving birth to a tasty new tradition.

Many students, such as freshmen Brighton Rust, Lucas Farnsworth and Barton Dahneke, remember their parents reminiscing about the dessert and cannot wait to try it for themselves. These best friends from Cleveland, Ohio, are making their own traditions with BYU ice cream.

“It’s more that just the delicious ice cream,” Rust said. “It’s a complete social event. You go with friends, dates, whatever, and it’s just the thing to do.” 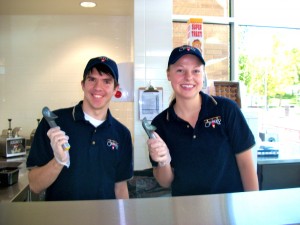 In the short amount of time they’ve been on their own on campus, they’ve already visited the Creamery four times.

“On our very first night here, we were invited to go get ice cream with some really pretty girls,” Dahneke said. “We knew then it was going to be a good semester.”

Though they cannot decide on their favorite flavor, they agreed their top three  flavors are German chocolate, chocolate chip cookie dough and mint chocolate chip.

“Our moms warned us that we would gain our freshman 15 at the Creamery,” Farnsworth said. “She may be right, but it will be totally worth it.”

Nathaniel Larson, a Provo native in the pre-accounting tract who works at the Creamery, said interacting with the people who come in to try the ice cream and the chance to sample all the new flavors are just some of the perks of this campus job.

“I love that the ice cream here is really ours,” Larson said. “The ‘modern meets old fashioned’ way of churning makes it BYU’s. We have our own style, and there’s no other ice cream like it.”

The Creamery is most popular during the evening, Larson explained. Whether it be dates, groups of friends or families, it’s a crazy experience when it gets busy. Smiling, he added that the scooping helps get his arms strong.

JC Taylor, assistant manager at the Helaman Creamery, said with more than 140 flavors, BYU Creamery is famous for its flavors and variety. 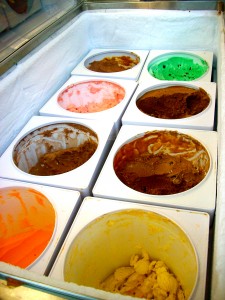 The flavors are tracked very closely with how they sell, Taylor said, and tend to cycle in popularity.

Over the years BYU Creamery has added many new flavors. Starting in 2011, the Creamery plans to introduce a new flavor at New Student Orientation each year. This year the Creamery introduced Seriously Chocolate and Bronco’s Cocoa Bean.

“It’s like ‘Fiddler on the Roof,'” Taylor said. “It’s all about tradition. BYU Creamery ice cream will always be a big hit.”

BYU Creamery is even a hit at off-campus events. Director of Dining Services Dean Wright said BYU will ship out a lot of ice cream for the grads who gather at away games.

“The grads who gather to support BYU at our away events love having Creamery ice cream there,” Wright said. “It brings them back down memory lane. Creamery ice cream is a tradition that now doesn’t have to be bound to on campus only.”