By Decker Westenburg and Marina McNairy

Lawmakers passed measures Friday to help those affected by the COVID-19 outbreak and last month’s 5.7 earthquake during day two of the Utah Legislature’s historic virtual session.

House members quickly passed two Senate bills to help mitigate the effects of the pandemic during a Friday morning session. Legislative leaders directed business from empty chambers fitted with screens where the faces of lawmakers appeared, streaming from their homes scattered across the state.

SB3005 would allow for modifications to school requirements because of the “soft closure” or online only instruction declared by Gov. Gary Herbert for rest of the public school’s academic year. The bill passed unanimously.

Representatives also passed a “right to try” bill, which would shield physicians from liability when they prescribe experimental medications for COVID-19 patients. The bill would expand the “right to try” previously passed by lawmakers to allow terminally ill patients access to experimental drugs.

Rep. Raymond Ward, R-Bountiful, a family physician, added a clarifying amendment. He wanted to make sure that the bill’s focus stayed on COVID-19. The bill passed the House 65-7.

Along with the COVID-19 related bills, the House heard a resolution addressing the impact of the March 18 earthquake and aftershocks. Rep. Susan Duckworth, D-Magna, who represents the area at the epicenter of the quake, sponsored the resolution.

She said the aftershocks have diminished in size, but was uncertain about what comes next. Duckworth and other House members who represent affected areas explained that the earthquake had damaged older structures that house low-income residents and elderly people.

HJR302 extends the earthquake-related state of emergency to May 18 so Utah residents may receive federal disaster aid. The joint resolution passed the House 71-3, before the Senate passed it unanimously a few hours later.

The House also debated SB3004 that proposes the creation of a Public Health and Economic Emergency Commission. The commission would be given power to assist the governor in jump starting the economy hurt by the COVID-19 pandemic.

House sponsor Rep. Mike Schultz, R-Hooper, said that “What this bill does is set a framework in place, giving the governor some guidance.” He also noted that if the governor chooses not to go forward with a plan the commission would develop, he would need to provide the reasons for why and where he got the data to explain the decision he makes.

Rep. Stephen Handy, R-Layton, said he worried that by creating the Public Health and Economic Emergency Commission, the state would divide resources with projects already underway to aid Utah residents. One effort he cited was testutah.com, an effort to give Utahns easier access to COVID-19 testing.

“The goal of the commission is to bring those efforts together and act in a unified manner,” Schultz told Handy.

Rep. Rex Shipp, R-Cedar City, said he had been taking many calls over the last few days. “People feel like their individual liberties are not being considered and would like to go to work,” he said.

Rep. Tim Quinn, R-Heber City, agreed with Shipp. Quinn said the new commission was needed to get the Utah economy moving. “As legislators, all of us have outside experiences, many in business,” he said. “We should be discussing how we’re getting this economy moving both after the pandemic and during it.”

Quinn noted the difference between the Corona task force, which is already in place to limit the spread of the disease, and the proposed commission is that SB3004 would focus on getting the economy moving again.

Rep. V. Lowry Snow, R-St.George, spoke in support of the bill. “Lots of people are discouraged right now,” he said. “They can’t visualize the light at the end of the tunnel yet. This commission will provide hope.” Snow said the sooner the commission can stimulate the economy again and make a plan, the better.

“We’ve learned a lot about the virus in the last several weeks,” said Schultz, the bill’s House sponsor. “We think there’s a way to live with the virus with precautions. There’s a portion of citizens in the state that are very vulnerable, and this commission is also charged with how to keep them safe.”

SB3004 passed the House 59-15. It now goes to the governor for his consideration.

The House and Senate will convene again on Thursday, April 23. 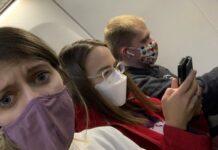 Delayed flights caused challenges for students traveling back to campus