Both athletes have played a major role in the success of this team. McKenna averaged 3.35 kills per set, totaled 28 aces, 59 digs and 38 blocks as BYU finished 16-2 in conference play. Mary is BYU’s all-time leader in career digs at 1,877 and recorded 234 digs, 88 assists and 15 aces against conference opponents. Although these girls definitely deserve these awards, they weren’t expecting to win them.

Miller said, “My sophomore and junior year, that was my goal. I wanted to be player of the year, and this year I just want to be playing because I was coming off of my knee and so I didn’t really ever think of it.”

Lake was also shocked, “It’s an honor obviously, and I’m really grateful. I was a little surprised because we have some really good liberos in the WCC.”

This team has dominated their conference, and Mckenna and Mary are just two of the nine BYU players to receive WCC honors. Although the girls won because of their individual accomplishment, they give credit to the team as a whole.

Miller said, “It’s not just me, and so it’s a really big honor but I think it’s more an honor for our team here at BYU.”

Lake agreed, “You don’t get any award without and great team, and so I know that that’s a cliché, but you don’t and unless your team’s successful, it’s harder to get that recognition.”

These girls have become a major component of this women’s volleyball team and we’re wishing them and the team luck as they begin tournament play tonight hosting New Mexico State at 7 p.m. 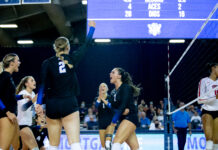 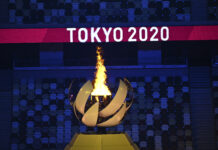 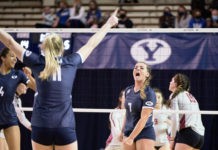