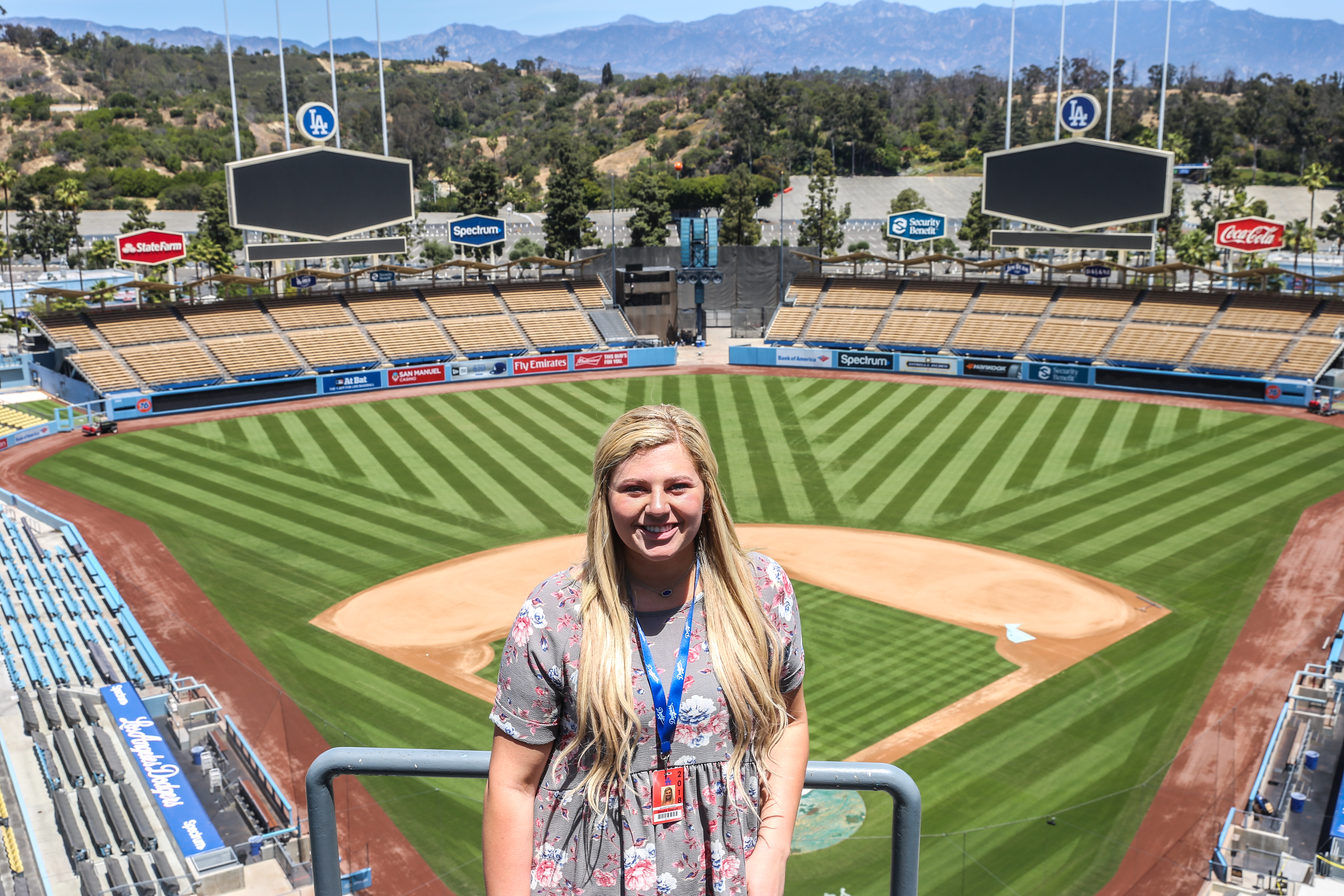 BYU public relations senior Shaylie Fawcett recently began an internship with the Los Angeles Dodgers. She has years of competitive baton twirling experience and runs her own business selling clothing for young twirlers.

Fawcett, a native of Riverside, California, began twirling at the age of three, following in the footsteps of her mother and grandmother. She went on to compete on the national and world stage, but she had to retire from competition after having back surgery during her sophomore year at BYU.

Fawcett began working with BYU sports marketing early in her college career, replacing the time previously spent practicing and competing in twirling, though she still performs at some BYU sporting events.

This experience in BYU athletics led her to the current internship with the Dodgers, where she is working in player development.

“In sports marketing, it’s all about who you know,” Fawcett said. “One of my best friends at BYU knew someone from back home (in California) who worked for the Dodgers, and she put us in contact with each other.”

Fawcett sent him a resume, and he told her they would be in contact in the spring when internship openings became available. The Dodgers don’t post their job openings online, so she was fortunate to get the internal connection.

Her duties as a Dodgers intern include keeping the player and staff database up-to-date, giving stadium tours to VIPs and assisting the travel director when he is on the road.

“Without the experience I had at BYU athletics, I definitely wouldn’t be here,” Fawcett explained. “They taught me so many things from a marketing level to how to work in a professional environment.”

Fawcett added that being a communications student gave her the organizational and technical skills she needs to do her job with the Dodgers.

“I feel like it’s been a perfect mix of those two things (BYU athletics and communications) that have put me in the position I am now,” Fawcett said.

Fawcett wanted to find another way to be involved in twirling after her back surgery, so she started a baton twirling T-shirt and tank top company called “Only Twirlers.”

“At BYU athletics, they jokingly call me the ‘queen of side hustles’ because I have a million jobs all the time,” Fawcett said, adding that she also substitute teaches every once in a while. “I obviously want to coach and judge and teach and all those things, but the Dodgers are taking priority right now.”

Fawcett explained that she saw a hole in the market because most twirling apparel companies produce boring, outdated outfits year after year.

“I came up with a few more modern things,” Fawcett said. “It took off last year, so I’m getting ready to release some new shirts for the spring/summer competition season.”

She uses a company in Provo to screen and print the shirts, and she works with them on design, though she comes up with the phrases on her own.

“I was born right into it,” Fawcett said of her lifelong connection with twirling. “It’s been super fun.”

Fawcett plans on working with the Dodgers through the summer and then returning to BYU in the fall to finish up her capstone in the communications program and her final football season as part of the sports marketing team.