Students have the opportunity to help other BYU students in need through the Choose 2 Give program, with events running March 19-31 across campus.

Choose 2 Give is a scholarship fund for students in need, funded entirely by other students. The campaign takes two weeks each school year to put on events through colleges across campus to raise awareness and encourage donations from students.

“I was surprised. As a judgmental human being you assume the kind of person who will receive these (scholarships), but it was cool to see the kind of people who you wouldn’t think are struggling, really are struggling,” Karen Toone, program director for Choose 2 Give, said.  “It opened my eyes to understand why it’s so important that we help everyone, and not make assumptions because odds are high a lot more people need your help than you realize.”

Students can apply for the need-based Choose 2 Give scholarship online. Communications Director Corbin Short said it was cool to hear the stories of the students who received the scholarship this last year.

“All of (the recipients), their education was on the line before the scholarship,” Short said. “They had a tough year, or a tough life to be honest, and the scholarship was given to them at the perfect moment.”

James Belyeu, vice president of communications outreach for Student Alumni, said there is not a specific pattern in the students that receive the scholarship, besides need.

“Some of them are very well known on campus, I think students will be shocked. When I found out I thought, ‘wow I never would have thought that person has a struggle.'” Belyeu said.

Belyeu explained that students in need often do not meet the school requirement for scholarships because of GPA. The Choose 2 Give scholarship is more about financial need and does not require a specific grade.

The entire goal of LDS Philanthropies is a spirit of giving, according to Eric Forbush, director of education for Choose 2 Give. He said if students give now when they have nothing, they will hopefully give more after graduation when they have real jobs and higher income.

The average donation is three dollars, according to Short. He said all students giving a small amount adds up to a large fund that can make a difference.

“The major thing about the Choose 2 Give scholarship is that it’s not funded by a corporation or a wealthy donor,” Belyeu said. “It’s 100 percent funded by students.”

Students can donate at any time online. The Choose 2 Give campaign now allows for monthly or yearly subscriptions and there is no minimum or maximum donation. Students can also choose which college’s students their donations help, according to Toone.

To help raise funds, the Choose 2 Give Campaign partners with all colleges across BYU Campus for two weeks of fundraising events. Each college has a separate activity and the proceeds from the individual colleges event are then used for students in that college.

The colleges use the scholarship funds for their students how they see fit, according to Short. He said the colleges decide which student will see the benefit of the fund.

“(The colleges are) not just using it to buy paper,” Toone said. “It really does go to benefit students in that program and the majority is scholarships.”

The fundraising event is unique because BYU has a rule against soliciting for money, according to Belyeu. He said because the campaign is run through LDS Philanthropies, they are allowed to run the fundraiser on campus for two weeks during the year.

Belyeu said the campaign calls every student on campus to educate them about the campaign and how to donate. He said the legality of contacting all students is rare, but is made possible for the campaign. Every student should be expecting a call during the two week event from student volunteers in the telephone office, he said.

Along with college events, BYU Dining services and the BYU Book Store allow students to round up their purchases to the next dollar and donate to the Choose 2 Give campaign, Toone said.

Short said the event is interesting to him because students will give what they can, even if it doesn’t feel like much. He also said seeing the students who received the funds was interesting because everyone that received funds knew about the campaign and wanted to be involved and donate.

Students who receive the scholarship are not required or expected to pay any funds back or to donate in the future, according to Forbush.

“Administrators say it’s amazing and put money into their events,” Belyeu said. “It shows how much they care about their students.”

Students interested in donating time, money, or just in learning more can find more information on the Choose 2 Give Website.

The event schedule is included below: 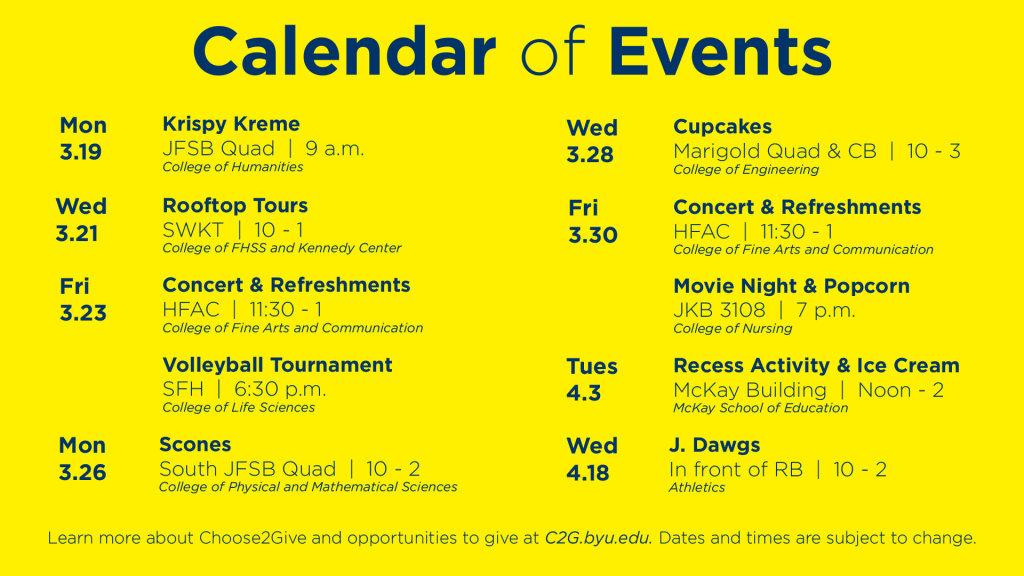