BYU’s mathematics department and female math students are responding to ridicule of a club poster that went viral.

BYU graphic design student Stephanie Driggs was the first to tweet about the poster, questioning whether it was satire. Her initial tweet has since gone viral.

“I was in the Talmage building when I saw the poster,” Driggs said. “It seemed almost comical the fact that it was a ‘Women in Math’ poster but there were four white men on it.”

Social media commenters called the poster “ironic,” and pointed out the absence of women in the photos. Multiple news outlets — including HuffPost, CNET and Fox 13 — picked up the story.

In a comment on the Department of Math’s Facebook post, math student Bryn Balls-Barker — the poster’s creator — said she feels “very supported by my male and female professors” and apologized for any offense she caused. 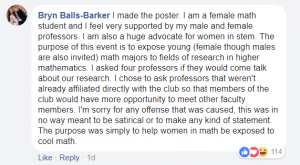 Driggs said when she first saw the poster, she thought it was for an event put on by BYU for women in math to attend. She later found out that a small women’s club — Women in Math — was responsible for organizing the event.

Driggs said she decided to go to the event because she felt responsible to see what it was all about after tweeting about it. She talked to Balls-Barker while there.

“When I tweeted the tweet, I didn’t intend for any specific person to be hurt by it,” Driggs said. “I meant for it to be mostly a comment about the institution and a lot of problems that go on at BYU specifically.”

The club is led by two female faculty members, and three undergraduate students help with planning, including Balls-Barker. She said the goal of the event was to expose younger mathemeticians to the research within the department.

“Seeing as members of the club are already aware of research being done by the two female faculty involved, we chose other faculty members that have both been supportive of the group and are doing interesting research,” Balls-Barker said.

Balls-Barker recommended the speakers chosen due to prior experience working with each of them individually. She said all four of these professors are strong advocates for women in math.

The design for the poster was simple: the name of the club — Women in Math, pictures of the speakers and a description of the event.

“Unfortunately I did not notice the irony or possible misunderstanding that the poster had the potential to cause,” Balls-Barker said.

She said it seems the dispute came from people mistaking the name of the club for the title of the event.

“It is unfortunate that an organization doing so much good, especially for women in STEM, is being put so undeservedly in a bad light for a mistake that I made.”

In an email to the Daily Universe, BYU math student Jane M. Cox said the Women in Math club invited the four male professors, and members of the club who “were involved enough know that ‘Women in Math’ is the name of our club, not the topic we’d be discussing that night.”

In another response to the math department’s Facebook post, Rebeca Paulsen, who teaches math at BYU, said the club meets monthly and is addressed by men less than once a year.

However, Driggs said she does not regret her initial tweet about the poster because she feels it comments on a greater issue at hand.

“A lot of people have been asking me about why I didn’t delete my original tweet,” she said. “I think the tweets that I posted underneath it after going to the event will really open up people’s eyes about this issue and bring a better light to the Women in Math at BYU.”

Driggs said she is sorry for any misunderstandings the tweet may have caused.

“I was simply trying to highlight the lack of female representation, but in this case it was all an honest misunderstanding,” Driggs said. “I am proud to be a student here and hope that BYU continues to move forward from this.”

Cox said she felt the media and others misrepresented the issue. She said the purpose of the Women in Math club is to provide female mathematicians with opportunities to connect with other women, have fun and find opportunities to succeed in math careers.

“This means we hear from women who have worked in industry as well as academia. Our faculty advisers, Rachael Emily Evans and Martha Kilpack, have been great resources for us to know how to make it in math despite the odds,” Cox said.

Cox said research experience is an area of interest for club members. The club invited four faculty members, all male, who have been published in top journals in their fields.

“The purpose of last night’s meeting was for us to explore the research areas of those four male professors, and to see what background in mathematics we need
to get involved,” Cox said. “Given that gender biases do exist, organizing successful research experiences are especially vital for us women who wish to pursue higher degrees in mathematics.”

She stressed that the poster itself was not misunderstood by members of the Women in Math organization.

“Our meetings are small, usually spread by word of mouth or announcements in class, as well as the occasional poster,” Cox said. “Many of us know each other, meaning that we knew what (was) meant by the poster and (we) weren’t worried by it. It was clear to us that our meeting on the 21st was going to be on the research those four male professors do: data science, topology, number theory and dynamic systems.”

Cox said it is up to women in STEM to speak out for themselves and expressed frustration that tweets and media coverage haven’t properly addressed the issue.

“There are legitimate issues surrounding representation in STEM,” Cox said. “We should talk about how female to male ratios in STEM professorships can improve, female under-representation in awards, the pay gap, the societal factors that discourage women to pursue STEM, and so on.”

But what Cox described as “an ill-thought out poster” — which was designed by a female student — isn’t the problem, according to Cox.

“Attacking an organization and an institution that is trying to help us succeed as we as women pursue STEM is wrong,” Cox said. “Women in Math has been a great resource for me, and despite this storm I hope it will continue to be one for many other female math students here at BYU.”