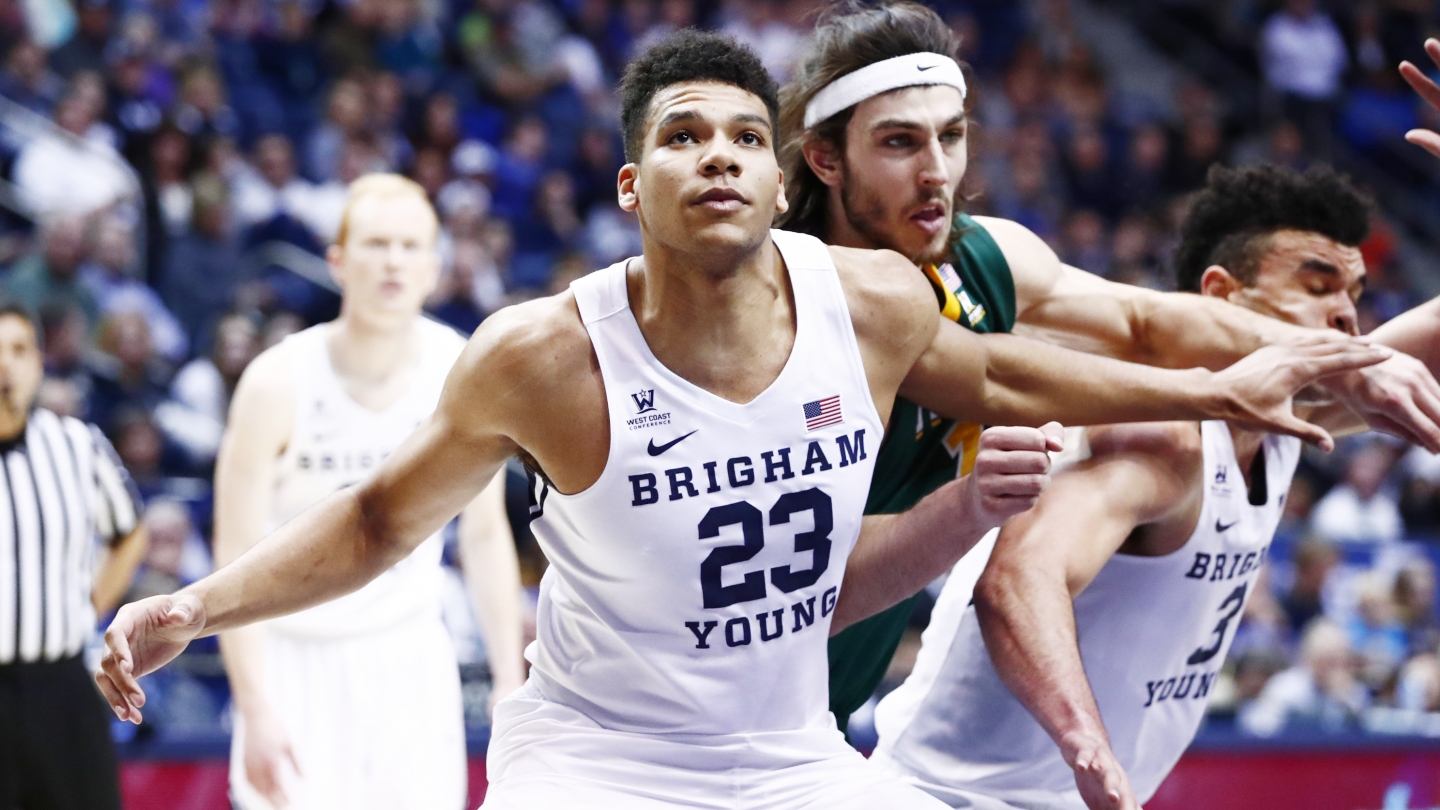 Yoeli Childs posted a double-double with 17 points and 19 rebounds while leading BYU basketball to a 79-73 win in a charity exhibition game against New Mexico at Dreamstyle Arena in Albuquerque on Friday, Oct. 27.

The proceeds of the game will go to the Hurricane Harvey Relief Fund to help those in Houston.

The game gave fans an idea of what the rotation might look like for the Cougars this year, after going through many personnel changes in the offseason.

This lineup played the majority of the game, with Jahshire Hardnett and Dalton Nixon seeing quality minutes off the bench as well.

It was not a pretty game, with BYU turning the ball over 23 times and shooting only 24 percent from the three-point line.

The game was close throughout, with the Lobos even pulling ahead at times when the Cougars struggled to score.

The first half ended 37-36, with neither team pulling away in the back-and-forth affair.

Childs nearly had a double-double in the first half alone, scoring seven points and pulling down nine rebounds.

The Cougars proved to be the better team in the second half, winning the rebound battle and getting their field goal percentage up over 50 percent.

BYU retained a small lead heading into the final minutes and a solid performance from the free-throw line sealed the victory for the Cougars.

Impressive performances came from Haws, who had 14 points, seven rebounds and six assists, and Elijah Bryant with 13 points and eight rebounds.

Coach Dave Rose mentioned after the Cougar Tipoff on Oct. 25 that they would need early contributions from returned missionaries Worthington, Nixon and Zac Seljaas.

Worthington proved to be a solid inside scorer with 12 points, including a perfect 4-for-4 from the free throw line.

Nixon didn’t miss a shot all night, from the field or free-throw line, and was a solid spark off the bench.

Seljaas also came off the bench and led the Cougars with four assists in the first half.

Childs finished off his breakthrough performance going 7-for-10 from the field and 3-for-4 on free throws. He also put up four blocks and three assists to put together a solid statistical outing.

“The coaches are on me about going out there and talking and getting guys going,” Childs said on his changing role. “Last year at this time I was a freshman; kind of a deer in the headlights.”

He looks like a much more complete and mature player on the floor this season, leading the Cougars on both sides of the floor.

Rose commented on Childs’ newly improved jumper this year, something he was able to show off in clutch moments against New Mexico.

The exhibition brought in a crowd of 4,902, with all proceeds from ticket sales going to hurricane relief in Houston and surrounding areas that were affected.

The NCAA allows for one extra exhibition game to be played if the proceeds go towards a disaster relief charity, and Rose shares a special connection with the city of Houston.

He grew up there and also served as co-captain for the University of Houston basketball team that finished as runner-up in the 1983 NCAA Tournament.

A handful of other charity exhibition games were played over the last week, highlighted by Missouri playing Kansas in a special edition of the “Border War” that raised over $1.75 million for hurricane relief, according to a press release from Missouri.

The game marked the 133rd time BYU and New Mexico have met on the court, as they were conference rivals in the WAC and Mountain West from 1950-2011. The Cougars now lead the all-time series 78-55; BYU also won the last non-exhibition meeting in 2015.

BYU has home exhibitions scheduled for Nov. 1 and 8 against Westminster and Colorado College and opens the regular season on Nov. 11 against Mississippi Valley State at 7 p.m. at the Marriott Center.