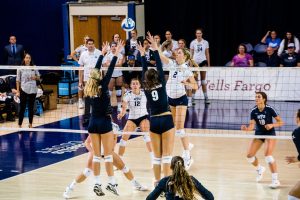 The No. 8 BYU women’s volleyball team on Thursday night defeated Pepperdine for the second time this season with a three-game sweep.

The Cougars advanced to a 20-1 season record and a flawless 7-0 conference record.

While the Cougars did beat the Waves, the match was much closer between the two teams than in previous games.

“We were scrappy tonight with some great touches on the block,” said BYU coach Heather Olmstead. “There were lots of long rallies, and we had to be patient until we could get our kills. I liked our tough serving.”

Veronica Jones-Perry led the Cougars with 12 kills, and McKenna Miller followed with 11.

The Waves started strong with a quick 5-1 lead, the Miller responded with two kills that allowed the Cougars to score the following five points and take the lead at 6-5. BYU then went on a second 5-1 run which was caused by Pepperdine errors leaving the score at 13-11. The two teams stayed close in score until Senior Cosy Burnett and Jones-Perry separated the gap and helped the Cougars lead four points, 19-15. BYU continued their lead by five before Pepperdine went on a 3-0 run to get within two points of their rival at 22-20. The Cougars responded with their own 3-0 run to win the set at 25-20.

Continuing their momentum BYU gained another 4-0 run to gain an advantage at 7-5 in the second set. Tristyn Moser surprised fans with back-to-back aces which kept the Cougar lead at 14-12. After a few Cougar errors, the Waves responded and narrowed the set at just 18-17. BYU rallied together to score the next four points to take a strong lead at 22-17. The Cougars stayed strong and Jones-Perry ended the set with a kill and a 25-21 lead.

A determined BYU took the court in the third set and after three-consecutive Wave errors, the Cougars edged forward and took the lead at 8-5. After a kill from Sara Hamson, BYU had a 13-8 advantage. Burnett then furthered the lead to nine at 19-10. The Waves rallied to score the next four points, but the Cougars were already too far ahead. BYU ended the match on a kill from Miller and a final set score of 25-15 and sweeping the match at 3-0.

The Cougars remain on the road for their next match on Saturday, Oct. 21, at 1 PM MDT against Loyola Marymount and can be seen TheW.tv.