July 17 – An officer responded to a noise complaint at Helaman Halls at 12:04 a.m. and located a group of individuals in a closed area. The individuals were escorted from the area.

July 18 – An individual reported two backpacks taken from the Richards Building soccer field. It was discovered that the backpacks had been picked up by a sports camp leader. The backpacks were found and given back to the owners.

July 18 – The individual pictured below is wanted for questioning in a credit card fraud investigation. Call Detective Chris Chambers at 801-852-7306 with any information. The suspect’s vehicle is also shown. 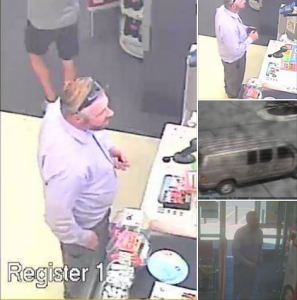 July 18 – A transient man was arrested after assaulting and molesting a woman and assaulting her children at their residence after the woman told the man he could not drive her vehicle.

July 17 – Possession of meth was reported around 6 p.m. near 700 Freedom Boulevard.