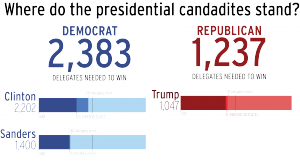 The Indiana state primary on Tuesday, May 3, was a big day for Donald Trump and his supporters as he effectively forced his Republican rivals out of the competition.

Ted Cruz decided to hang up his campaign after the defeat in Indiana. Mathematically, Trump is sure to earn a majority of the delegates and win the Republican nomination. John Kasich has given up as well, leaving the Republican party to face Trump as their nominee for President of the United States.

“It appears that path has been foreclosed,” Cruz said. “Together, we left it all on the field of Indiana. We gave it everything we’ve got, but the voters chose another path, and so with a heavy heart but with boundless optimism for the long-term future of our nation, we are suspending our campaign.”

Trump is 190 delegates away from securing the GOP presidential nomination, but since he is now running unopposed, he has virtually clinched it. On the Democratic side, Hillary Clinton has a commanding lead with 2,202 projected delegates.

By winning the Indiana primary on Tuesday night, Trump moved closer to reaching the votes needed to become the official Republican nominee. Clinton lost the Indiana primary by a narrow margin to Bernie Sanders, but she still received a portion of the delegates. Clinton’s lead in superdelegates has nearly secured her nomination.

Bernie Sanders is also working hard against Clinton in the Democratic race, but trails due to the superdelegates pledged to Clinton. BYU Political Science Professor Richard Davis explained why Clinton has received so many more superdelegates than Sanders.

“Clinton has more (superdelegates) because she is seen as more electable. Democratic superdelegates worry that he is too radical and will end up harming the party’s chances against Donald Trump in the fall,” Davis said.

According to the rules of the GOP, Kasich and Cruz could not possibly receive the 1,237 delegates needed for nomination in the primaries. This ultimately led to their decisions to drop out of the race.

“As I suspend my campaign today, I have renewed faith, deeper faith, that the Lord will show me the way forward and fulfill the purpose of my life,” Kasich said.

Primary elections continue on Tuesday, May 10 with the Nebraska and West Virginia elections.