Momentous bill signings normally include a public signing by the governor and a few speeches. However, this bill signing doubled as a memorial service for those who had served during the Vietnam War era. More than 100 people were present. Most were either currently serving military personnel or veterans, dressed in uniform or simply wearing their military side caps.

While March 29 is Vietnam Veterans Recognition Day, March 30 was chosen as the day to celebrate it. Recognizing veterans for their service, Gov. Gary Herbert signed three bills to benefit and honor these veterans. 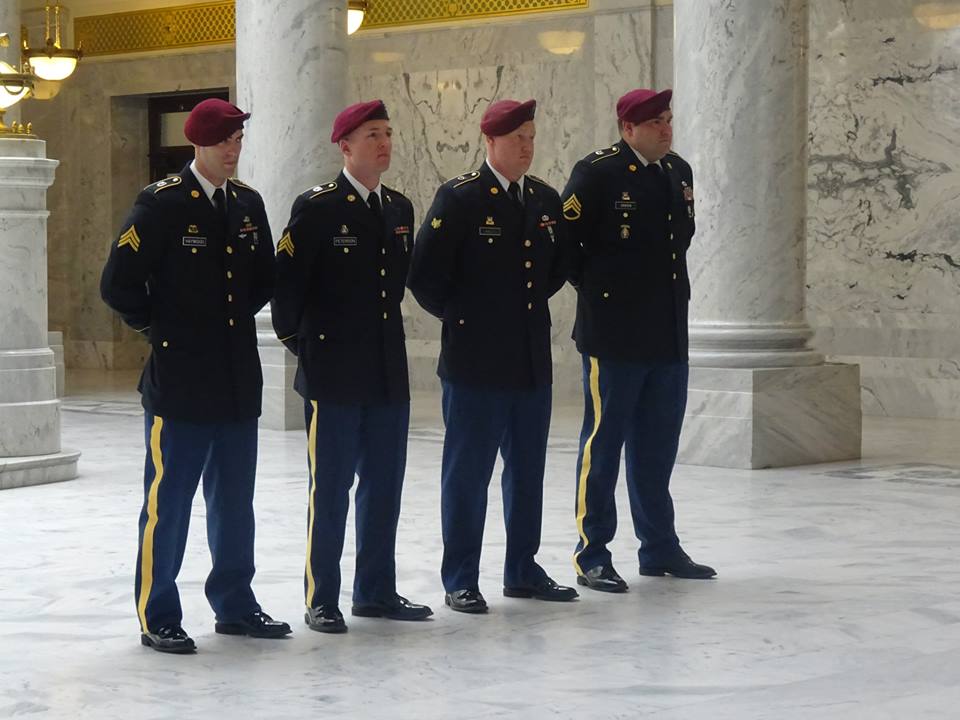 Three hundred and eighty-eight Utahns lost their lives in the Vietnam War and 14 are still listed as missing in action, Herbert said. Currently, 50,000 Vietnam veterans are estimated to live in Utah which is more than the state actually had sent out during the War.

“We should always thank the veteran for their service. They don’t really ask why. They just do and follow their commander,” Herbert said.

Among the bills signed was a bill to designate certain parts of I-84 as the Vietnam Veterans Memorial Highway. The bill was sponsored by Rep. Justin Fawson, R-North Ogden.

Sen. Curtis Bramble, R-Provo, sponsored SCR6, a concurrent resolution to renew the state government’s commitment to Vietnam Veterans and to thank them for their service.

Finally, Sen. Peter Knudson, R-Brigham City, along with his co-sponsor Rep. Paul Ray, R-Clearfield, sponsored SB214, an initiative to create veteran courts throughout the state. This bill was also signed by all 104 legislators.

“We feel very strongly as a legislature that we need to do all we can to show not only our respects but to truly do something meaningful for them as they go forward with their lives,” Knudson said. “Very often, though, veterans are responding to what they brought home with them from combat and live with it every day and every night.”

SB214 would make a specialized court system available to veterans across the state who are found guilty of a crime. The court would be sensitive to the sacrifices made by the veteran. This would not, however, make the wrong a right. Instead, the courts would provide a sensitive atmosphere in an attempt to help the veterans through their struggles.

Although hard lessons were learned from the Vietnam War there were some good lessons learned as well, Herbert told those gathered at the Capitol. Because of these veterans, a movement came about, he said, “if you’re old enough to fight and die for your country, you ought to be old enough to vote for those sending you into harm’s way.”

Dennis Howland, president of the Utah chapter of Vietnam Veterans of America, also spoke, particularly to those who’ve told him “‘we’re not really veterans because we [didn’t] have boots on the ground.’

“You’re wrong,” he said. “We didn’t fight that war by ourselves by going in-country. When we needed a tank somebody sent it to us; whenever we needed an aircraft somebody sent it to us. We sent 58,000 of our young men and women home to be buried. Someone gave them their last military honors; someone grieved [and] prayed with their families; somebody took care of 300,000 Purple Heart recipients.”

Another veteran Lt. Col. Jay C. Hess was the concluding speaker. He was also a former prisoner-of-war. Hess spoke of the infamous Hanoi Hilton prison. It was so hot that they would not wear the pajama-style clothing issued to them, he said. However, when they began holding church services in their jail cell the prisoners would put on those clothes despite the heat.

It felt good to say the Pledge of Allegiance and it was wonderful to see the American flag for the first time after having endured colorlessness of captivity, he said.

“I went to Vietnam a fighter pilot,” Hess said. “I came back a born-again American.”