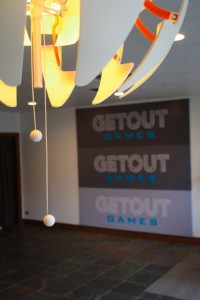 There is an escape room attraction right here in Provo, and it’s a little puzzling.

Getout Games is currently ranked third on Trip Advisor for the most recommended activities in Provo, despite having opened just this February. This entertainment concept is the first to open in Utah County and features 60 minutes of puzzles and codes for groups of up to 16 people.

Escape games are a quickly growing industry around the world and were originally inspired by “escape the room” computer games in which players are locked in a room and must observe and utilize their surroundings in order to get out. Getout Games is set up as a heist, in which two teams race against each other to find a hidden safe, break in, get the gold and escape the room before the other team.

“We thought that this would be a really nice way to give back to the community and create something that was really different and fun,” said Dallin Henrie, one of the three owners of Getout Games.

Some participants were skeptical of the concept. Being locked in a room and trying to escape sounds like something straight out of a horror story. However, participants have raved about how much fun they had at Getout Games and have compared it to being in a movie like “Oceans Eleven” or “The Italian Job.”

Getout Games has gone through groups of beta testers, and the owners have made sure to provide a one-of-a-kind experience for all age groups, keeping it challenging, yet fun.

“We’ve tried iteration after iteration, making sure that it maintained energy and that people didn’t get burned out,” Henrie said.

The company plans to create three to four more room scenarios, providing a different experience for people each time they visit.

Makenzie Hanson was a beta tester for Getout Games. She enjoyed it so much that she is now an employee.

“It’s a blast. It’s so fun for family home evening activities, dates, business groups. It’s just really fun, and it’s so different,” Hanson said. “You go on your bowling dates, you go on your dinner dates, but this is fun, and it’s interactive, and it’s actually a good way to get to know someone rather than just going to a movie.”

The minimum number of participants to book a reservation is two, but accommodations can be made for up to 16 participants. Prices vary depending on the size of the group, and there is no age requirement for participation. Getout Games is available by appointment only at getoutgames.com. It is located at 283 N. University Ave. in Provo. Use the code “UNIVERSE25” online to receive 25 percent off admission.