Somehow, the lady has fallen in love with the tramp. Love like this is only found once upon a dream, and together they have seen the light. But as the fog is lifted, they see the nightmare that inevitably lies before them — meeting the parents.

Meeting the parents can be a daunting task in the quest for a happy ending. The gentleness and kindness of loving parents often manifests itself through heavy testing of their child’s chosen suitor. All this is done in order to discover if the significant other is worthy of their prince or princess. Some parents may protect their children with all the fierceness of a dragon.

It’s a good thing Disney knows a thing or two about taming dragons.

Objections from parents can be handled peacefully by implementing just a little bit of Disney magic into the conversation. 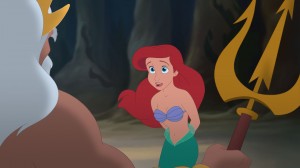 1. “If only I could promise forever, then we could just be we forever, you and me, forever and ever.” — Christopher Robin, “Winnie the Pooh”

Jamie Torgeson loves all four of her children and will accept nothing less for them than someone who will love them wilth all they have.

“A lot of their happiness depends on their spouse, ” Torgeson said. “So much of their self esteem and respect for themselves comes from the love they will get from their spouse at home.”

No one is perfect, but some parents expect their future sons and daughters-in-law to be just that — because only the best for their children will do. It is important for those seeking a happy ending with someone else to convince their parents that although they may not be perfect right now, they will work hard to become worthy of their child’s love.

Nanette Riggleman saw her son Kyle married back in September to a daughter-in-law she adores. “One thing I just really love about her is the fact that even though she’s great now, I know she’s going to be an amazing woman one day.”

A major fear among parents is that their children will marry someone who does not wish to be part of the family.

Family is very important to Jan Gaylord, mother of five, and she has seen selfish relationships before.

“I notice how important family is to them,” Gaylord said. “I’ve always worried about someone who would want to marry my son and not want to be around us. I would feel like I’ve lost my son. But if family is important to her, then our family would likely be as important as hers.”

4. “Do not be deceived by appearances, for beauty is found within.” — Old Beggar, “Beauty and the Beast”

One does not have to look like Prince Charming to be charming. Parents are concerned about the type of person their most precious possession will be spending the rest of eternity with.

David Craig has met a few of his daughter’s boyfriends, and he has high expectations for whomever she brings home.

“I don’t like it if he’s elusive,” Craig said. “What impresses me are the ones that shake my hand with confidence, but more importantly the ones who have manners and show respect to adults.”

By proving inner beauty, significant others can convince parents that they are the perfect suitor.

The introduction may be scary, but after pushing through the initial awkwardness things usually turn out alright.

“I was scared at first when he took me into a room and sat me down in a chair with a set of torture tools right next to where he was sitting,” said Tyler Condie about his experience meeting his wife’s father for the first time. “But after a few very pointed questions, he made me race against him in a NASCAR game on the PlayStation, and we have been great ever since.”

The quest for a happy ending is one that will last a lifetime. It’s full of monsters and ogres, forked roads and dead ends, all in the form of trials and adversity. This road can be smoothed with the support of loving in-laws. Meeting potential in-laws may be scary at first, but it will be worth it in the end. As Gaston would say, “It’s a nightmare, but it’s one exciting ride.”