BYU’s Arabic Society hopes to enlighten students about the meaning of community and about matters in the Middle East with an on-campus event.

The event will be held Monday, Nov. 24, from 4:30 to 6:00 p.m. in the Hinckley Alumni Center Ballroom. The evening will include Oriental music and dance numbers, Middle Eastern food and an art walk.

James Garrett will be the featured speaker at the Arabic Society event. Garrett will be speaking on how to educate and empower individuals and communities to solve their own problems and create a better world, focusing on examples from the Middle East.

Garrett and his wife served as American Peace Corps volunteers in Salt, Jordan, and worked with the youth there. While there, they focused on building eight critical thinking skills with the aim of equipping the rising generation of Jordanians to become creative and effective problem solvers.

The Arabic Club is pleased to announce Garrett’s trip to BYU and hopes for a good showing. However, students across campus have not shown as much enthusiasm as the club hoped for.

Jordan native and international relations major Mutaz Bawaneh wishes more students at BYU would demonstrate interest in cultural opportunities such as this. 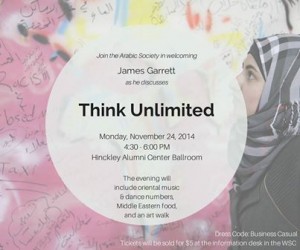 “It shocks me how many people do not plan to attend this event and other cultural events hosted by people of other nations, religions or cultures,” Bawaneh said. “It is my understanding that Mormon culture is all about go and preach, but when it comes to other cultures they don’t know much.”

Bawaneh believes that BYU students are bright and intelligent individuals, but they lack a deep understanding of other cultures and beliefs. He believes this limits their ability to understand people of different faiths, cultures and backgrounds.

The Arabic Club not only focuses on Arabic students or students studying MESA or Arabic majors at BYU, but they focus on educating all BYU students about the most news-occupying region of the world currently.

Bawaneh said he feels like he is emissary for his people. “I am ambassador for my country, my culture and my religion,” Bawaneh said.

The Arabic Club hopes to burst the bubble that stops many students from attending events such as this.

Tickets will be sold for $5 at the information desk in the Wilkinson Student Center.