Spring football ended last week but the football preview has a long history at BYU. This week we’re throwing it back to spring football in 1983. LaVell Edwards was coach and the cougars were just one season away from their historic 1984 championship.

This article was originally published in the March 22, 1983 edition of The Daily Universe.

Spring is here. Finals are coming soon. Students are out scoping grocery stores—not necessarily for the best food buy, but in search of the much-needed packing boxes necessary to take home accumulated treasures.

While the majority of us are tying up loose threads and waiting for the semester’s end, 125 athletes, eight full-time coaches and LaVell Edwards are just beginning to prepare themselves for this fall’s football season. 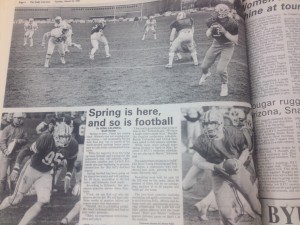 Spring football has been going on for about two weeks and will continue for 20 days, according to NCAA rules, said Edwards, head coach.

According to Edwards, this preseason practice serves three functions:

“First, we can find out who the players are for fall. We will have only three weeks of practice before our season starts this September.

“Second, this is a teaching period. We teach technical skills and how to play under pressure.

“Third, we experiment with formations and plays.

“I feel really good about what we have done so far,” Edwards said. “We have a tough season ahead of us.” Besides the regular conference schedule, Baylor University and ICLA have been added to this season’s calendar.

While most other schools start spring football in April or May, because of BYU’s semester schedule, “we are playing in March,” Edwards said.

The quarterback situation is “solid” with Steve Young returning and Robbie Bosco, a sophomore who red-shirted last year, passing for the team, Edwards said

Recruiting went well, he said. Of the 125 men on the team, about 90 percent of them will be on scholarship another 15 to 30 players will “walk on” the team.

The two-hour practice includes stretching and agility exercises, tackle and blocking drills, offense and defense work out, and passing and running scrimmages. The team will end their spring practice with the traditional ‘Blue and White” (offense against defense) game on April 1 at the stadium.