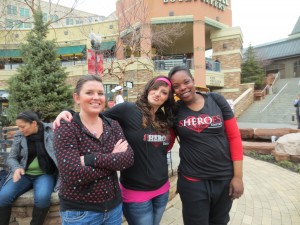 People from diverse backgrounds came to support the cause.

Amy Cabral, a resident of Brigham City, said, “I’m here to empower myself and to encourage other women to (be survivors). They can be survivors and not victims. There are people standing up and fighting.”

“We’re better than that,” said Neisa Collins, of Tulsa, Okla.

Sheroes is a Utah non-profit that identifies survivors of violence who would be willing to serve as role models to show other women they can rise above their situations and live out their potential. The group addresses violence against women, sex abuse, human trafficking, bullying and helping female veterans.

Sheroes was one of the sponsors of the One Billion Rising movement that brought dancers from all over Utah to dance and raise awareness.

Students from many universities attended the event. Kelsie Fortner, from Salt Lake, is a neuroscience student aligned with Sheroes; she said she supports them because she is against human trafficking and supports the One Billion Rising movement.

Julie Harman, a spokeswoman for Sheroes, said, “One important thing to recognize is even the voices that aren’t usually heard are being heard. They’re not topics we talk about in the news; they’re hidden topics.”

The mission statement of the non-profit states that the organization strives to help people care about others, help women realize their self-worth and break down barriers that separate human beings, according to Harman.