Event organizer Betsy Brunner said in an interview with Salt Lake Tribune that “the show starts a visual conversation about air pollution so we can engage new people and give them an outlet to express themselves and image it in a different way.”

One of the main topics of this conversation is the effect of air pollution on health. The Beijing-SLC Connect website highlights the link between exposure to pollution and the development of birth defects, chronic obstructive pulmonary disease (commonly referred to as COPD), respiratory illness, heart disease, cancer and nervous system damage. The Air Quality Index (AQI) is a uniform index used nationwide to measure the risk of developing any one of these side effects of pollution on a given day.

China and Utah are both in critical situations with regard to pollution and have often been in hot water with the AQI. Beijing’s current AQI is “unhealthy,” which means everyone is at risk of experiencing health effects, not just those with sensitive health. According to the Global Burden of Disease Study as cited by The Lancet, 2.1 million in Asia died from air pollution in 2010. Then, while the current AQI in Utah is considered “Good,” the American Lung Association cited the Provo-Orem area as being the 11th worst in the Nation out of 277 metropolitan areas for short-term particle pollution, which puts them at risk for experiencing health effects related to pollution.

The Beijing-SLC Connect wants to make the issue of air pollution personal by allowing those who attend to contribute to existing works, create their own masterpieces as well as talk to the artists themselves. The exhibit is open Monday–Thursday, 10 a.m. to 4 p.m., until Feb. 20. 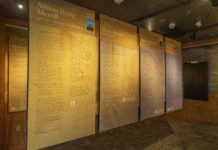