Mayor John Curtis has issued a challenge to combat the unsightly inversion layer that affects Utah residents every winter.

Jaron Hansen, Ph.D, an associate professor in the biochemistry department, studies how bad the pollution really is. He currently has a lab set up on campus that is measuring air levels 24/7.

“Provo has some of the worst air in the nation,” Hansen said. Provo’s air is even significantly worse than Salt Lake City’s.

Hansen said the pollution levels are not good because people are breathing the pollution. The pollution settles deep into the lungs and has negative effects on the body. The thick layer of smog can be visibly seen, making even the mountains difficult to see on some days.

These health effects can include damage to the immune system, as well as neurological, reproductive, developmental, respiratory and other health problems, according to the Environmental Protection Agency website.

“There are currently 24.2 micro grams of pollution in one cubic meter of air,” Hansen said. “Earlier today it was as high as 62.”

Curtis wants the residents of Provo to help combat these pollution levels. His requests include that residents not idle their cars for more than 30 seconds, park and walk instead of using drive-up windows, consolidate trips to reduce total family driving and not burn wood. 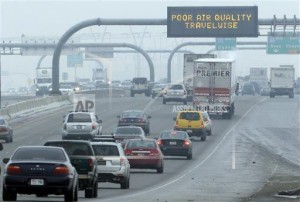 “These are admittedly not big things, but if others will join me, our thousands of small things will make a difference,” Curtis said in a prepared statement. “Just imagine, if every resident of Utah County eliminates one daily vehicle trip, that would be 500,000 less trips per day.”

Corey Newman, a member of Curtis’ staff, said Curtis wants to do this clean air challenge because we are all affected by the air we breath.

“We want people to be proactive,” Newman said.

Visit Mayor Curtis’ blog at provomayor.com to find out more about the clean air challenge.