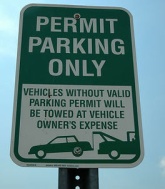 The Provo City Council passed a motion requiring towing companies to produce video proof of the parking violation prior to collecting payment.

The requirement has been set in place in hopes of stopping the exploitation and unfair situations brought about with Provo’s towing stipulations.

Provo Mayor John Curtis and staff have been working vigorously toward a fair compromise of predatory parking enforcement for over a year. The action began after Curtis wrote about the issue on his blog and received a record-setting response. The post has over 300 responses of personal stories.

Students and residents are well aware of the outrageous fees and the “poaching” by tow trucks. Fees as high as $365.00 have been reported for cars towed for being parked illegally. There is also an issue of tow trucks “staking out” areas waiting to tow immediately following the time limit.

Provo law makers are keeping constant dialogue on the issue. Deputy Mayor Corey Norman explained they were working on behalf of the students.

“It comes to these students asking whether they get their car released for $300, or do I put food on the table on pay my rent,” Norman said. “The crime does not justify the pain.”

The video evidence requirement is only the beginning of what the Mayor’s office hopes to achieve.

“We are coming out with a very aggressive package that helps balance between the proper right to the towing individuals and the needs of the students,” Norman said. “It won’t be perfect, but we’re not in the business of letting perfect get in the way of good.”

Many students at BYU have had their fair share of towing and parking issues. Kaiti Purse is now a senior at BYU and has had two different experiences with having her car towed.

“Getting my car towed ruined my first week here at BYU,” Purse said. “The lines were faded and I brought photo proof to the company, but they wouldn’t listen to a word I said.”

Students quickly learn be aware of tow-away zones and move their cars at the appropriate times. But sometimes it isn’t enough. Junior Justin Caller said he never feels his car is safe.

“Whenever I leave my car in an unfamiliar area, I more than half expect it to be gone when I come back,” Caller said. “I always look for signs, but you never know with the tricky rules.”

The city has also been working with the state government to reduce the fees towing companies may charge. The state regulates the amount.

A bill was signed into law by Gov. Gary R. Herbert concerning towing amendments this summer, but it did not hold the legislation Provo city had hoped for. The bill deals mostly with requiring the tow companies to accept all forms of payment and posting clear signage. Norman felt it was “watered down.”

“It doesn’t do any more than what we can do as a city,” Norman said. “But it is a win because it keeps the dialog going. We need the state to do research and justify the fees.”

Other tools the mayor’s office hopes to implement are currently being tested with a large apartment complex. The program includes a visitor loading zone, 24/7 access to temporary permit, and an appeal process to an independent third party.

University Parking Enforcement has been willing to work with the mayor’s office, and created a “Customer Bill of Rights” this summer. However, the document does little for the customer besides telling them what fees they owe.