A recent poll shows President Barack Obama’s proposed military strike is unpopular with the American public, according to the New York Times. Instead, many Americans are calling for the removal of Syrian chemical weapons by diplomatic means. 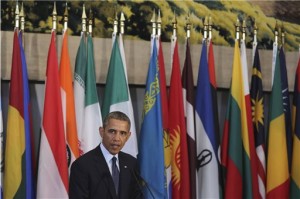 Obama made a plea for support to the United Nations:

“Though core American interests are not directly threatened, we stand ready to do our part to protect basic human rights,” he said. “But we cannot and should not bear that burden alone.”

Utah Sen. Mike Lee is one congressman who has opposed military intervention in Syria but supports disarming President Assad diplomatically.

“The president has not convinced Americans that the Syrian civil war represents a vital national security threat,” he said. “The better path for the president would be to continue to work with our allies to secure Syria’s chemical weapons.”

Syria has had the largest refugee displacement worldwide in the last 20 years, totaling over a million. The region’s political stability has raised international concerns. Many American politicians said they oppose military action and do not want to repeat war in the Middle East. The United Nations and American allies also oppose an American military strike on Syria.

There is one fact the United Nations has been able to agree on: President Assad gassing his own people is a violation of human rights.

“It’s hard to find moral high ground on either side. There is no particular pathway for resolution,” said Quinn Mecham, political science professor. “We have not been able to formulate a Syrian strategy that punishes gross human rights violations.”

Mecham said he believes the US threat has motivated Russia to act in a way that could bring positive results. Russia offered last week to take Syria’s chemical weapons. Whether this is a reliable proposition remains to be seen. Russia has been supplying the region with weapons for decades.

“More information is needed before we can determine if the Russian proposal is a viable option,” Mecham said. “There are valid concerns this may not work. The plan must be credible, timely, and Russia must be adequately transparent.”

“At the very least this raises the stakes for the Syrian Regiam from using chemical weapons,” said Mecham. “It makes it less likely Assad will strike again.”

Other experts said they are most concerned with human rights responsibilities as well.