This is part of a series called “Outside of the game.” Other featured BYU student athletes are Adam Hine, Erica Owens, Kyle Rose, Taryn Lewis and Ben Patch. The complete, interactive iBook is available for free in the iBookstore.

While some people find it hard to find something interesting to say about themselves on the first day of school, junior baseball player Brock Whitney always has something to fall back on — and its not the fact that he plays for the BYU baseball team.

Whitney, a .267 first baseman for BYU, is much more than a baseball player. He was an athletic kid growing up and was always in search of new hobbies and interests. When he was in high school, a friend helped him find a new talent he didn’t realize he had. 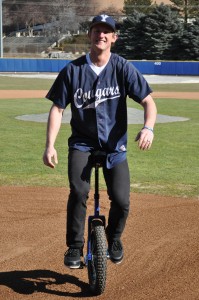 “My friend (Justin Sorenson) was big into unicycling,” Whitney said. “He had like six or seven unicycles and he would ride them around. It looked fun and it looked hard. I was kind of into doing difficult things and trying to branch out in that point of my life.”

Whitney decided to give it a try.

“He gave me a few pointers and let me borrow one of his unicycles, and through a lot of pain on my shins and falling over I finally figured it out and it just clicked,” Whitney said.

Whitney’s first-year coach, Mike Littlewood, said that in the short time he’s known Whitney, he can see how his desire to do hard things has translated to baseball.

“I think Brock’s one of the most talented guys,” Littlewood said. “He’s not afraid to compete against anybody and that sets a great example for our team, especially our young guys. I can see how that would translate into doing something new and trying to stretch himself.”

His love for unicycling became a a part of his college applications as he and a few other friends were able to form an official club in high school.

“We got a couple of our friends interested in unicycling and they learned as well,” Whitney said. “We ended up thinking we could do something with this. We were also on yearbook and thought it was another way we could get our pictures in the yearbook. So we made it a club and I think me, Justin and one other kid were the only ones that could ride, but we got as many people as we could to sign up for the club and it was kind of fun.”

After high school, college baseball and a mission to Monterrey, Mexico, his unicycling was put on hold, but now Whitney still rides it for fun during his free time.

His advice to others who want to try unicycling is to be patient and persistent.

“First off, it’s hard, but there comes a point where you just find a perfect balance and once you find that point it’s just like you’ve been doing it your whole life,” Whitney said. “I would wear shin guards, especially if you have metal pedals. (It can be) fairly discouraging. I think I spent four hours straight just trying to pedal twice. It was bad, but I stuck with it and it’s fun.”

Whitney’s passion for both baseball and unicycling has given him something he can always talk about.

“It’s interesting and every first day of class I always have something I can say,” Whitney said. “Whereas some people say not very original things, I can say I ride a unicycle.”