The Cougars didn’t forget being on the losing end of a buzzer-beater just six weeks before they hit one of their own on Tuesday night against Utah State.

As excited as BYU was about Craig Cusick making the game-winning shot against in-state rival USU, BYU is just as prepared for the game against the St. Mary’s Gaels. 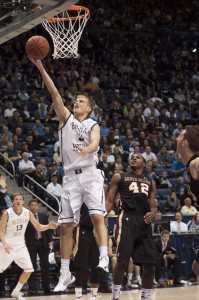 “We’re excited,” Tyler Haws said. “We’re looking forward to that game for sure. Our defense has to be solid, and we have to be ready for a battle, but I feel really comfortable with the way our guys are playing right now, and we’re going to be ready for them.”

Haws scored a game-high 23 points in the teams’ previous meeting, including a jumper that gave BYU a two-point lead before the Gaels’ guard Matthew Dellavedova scored the game-winning points. Haws is also only nine points away from joining BYU’s “1,000-Point Club.”

The Cougars must keep the Gaels off the glass after allowing them to grab 12 offensive rebounds to BYU’s four.

BYU coach Dave Rose hopes their big win against USU brings energy and confidence to the Cougars after winning a hard-fought battle.

“Any time you win a close game, (players’) confidence level is good,” Rose said. “Their spirits should be good and look forward to a really tough game on Thursday … A lot of guys had a chance to play, and hopefully it brings our team together.”

The game will tip-off on Thursday at 8 p.m PST at St. Mary’s with a live broadcast on ESPN2 and KSL radio.